For the past five years, Cathy Lanier has been in charge of security for arguably the most popular sports league in the U.S. – the National Football League – guiding the league’s 32 teams and its high-profile events such as the Super Bowl, the Pro Bowl, and the NFL Draft through everything from social unrest and bomb threats to the Covid-19 pandemic. 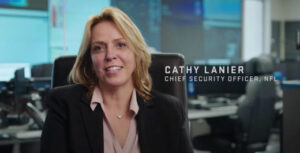 So what concerns the Center for Homeland Defense and Security alum (Master’s Program 0401/0402) among future security threats to the sport and the wider community? Technology adapted and leveraged for targeting the NFL and its events, and the U.S. in general, she says.

“The scariest emerging threats are technological,” Lanier said during an interview with CHDS after serving as a guest speaker for an Executive Leaders Program session last month.

The NFL Senior Vice President and Chief of Security  that pointed out that technology is increasingly interwoven with so many aspects of everyday life, noting the emergence of “smart cities,” autonomous vehicles, and 5G, among other technological advances.

And Lanier, who joined the NFL in 2016 after serving for a decade as the first female Chief of Police for the Washington D.C. Metropolitan Police Department, added that technology is also at the core of the ubiquity of social media and its ability to influence social, political and racial issues, including promotion of existing divisions in society.

“Everything is increasingly becoming embedded in technology and technology embedded in us,” she said. “Think how much operational security is linked and depends on cybertechnology. The cascading effects of an attack and the interconnectedness of our society makes it a real concern.” 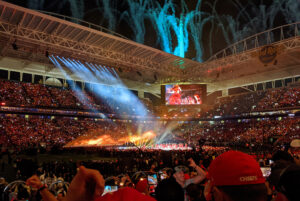 While Lanier said her concerns include the entire nation’s vulnerability to such attacks, she also noted that the NFL now operates on a global scale with games being played in the United Kingdom and elsewhere, and the league’s crown jewel – the Super Bowl – is a worldwide spectacle drawing around 150 million viewers globally in recent years (though the largest percentage by far are U.S. residents).

“(The Super Bowl is) one of the most-watched events in the world,” she said. “Everyone who is anyone has performed at the Super Bowl. An attack on the Super Bowl would be devastating for the American people.”

Lanier said when she took the NFL job she didn’t anticipate just how large the crowds were at their tentpole events like the Draft, which she noted drew 600,000 in Nashville in 2019. She describes the Draft’s multi-day event as “the next Super Bowl” in terms of security requirements due to its rapidly expanding popularity.

That, she said, requires meticulous planning and ongoing vigilance regardless of the potential security threats.

“With every single plan, we have to be completely prepared and get everything right,” she said. “The terrorists only have to get it right once.” 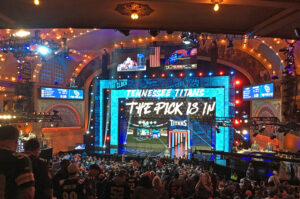 At the same time, Lanier said the ability of state and non-state entities to “weaponize” social media in an effort to drive division, and even extremist threats, is also a concern.

She noted that there have been multiple social media posts in recent years portraying the NFL or its players in an unfavorable or controversial light, including fake videos of NFL players burning an American flag in the locker room which she described as a “perfect opportunity to spin racial divisiveness.”

During her guest speaker appearance last month, Lanier spoke about a range of NFL security-related issues, noting that when she joined the league she relied on her quarter century of experience in law enforcement and counter-terrorism to transition the league’s security program into a more robust “360-degree security program” inclusive of cyber security, intelligence and air space security.

She said the NFL now plans for security at its largest events 3-5 years ahead of time, using miles-wide perimeters. For instance, Lanier said the NFL is already working on security planning for Super Bowl LVII in Arizona in 2023.

And she said the league’s recently developed Global Security Operations Center provides a “physical center with a broad virtual reach.” The GSOC was especially helpful in the NFL’s response to the Covid-19 pandemic during which the league hosted about 1.2 million fans at about 21 stadiums and conducted the first “virtual draft” in the midst of the pandemic-related restrictions on other businesses last year.