In a somber ceremony ranging from the Herrmann Hall Quarterdeck to the 9/11 memorial on the shore of Lake Del Monte, the Center for Homeland Defense and Security and the Naval Postgraduate School joined together to commemorate the 20th anniversary of 9/11 on Friday, Sept. 10. 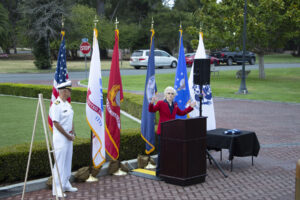 While noting the continuing effects on our nation of the horrific attacks two decades ago, the still-difficult memories shared by so many and the need to continue remembering that day, as well as the challenges the nation continues to face, Rondeau said the U.S. perseveres as the world’s greatest hope and force for good. 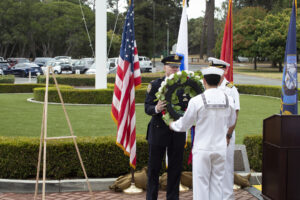 “We all remember where we were on that fateful day, September 11, 2001,” he said. “Today, we remember those we lost on that day; we celebrate our nation’s strength and resilience; and we draw inspiration from the ways in which survivors and victims’ families continue to honor their legacy.”

Capt. Bryan also remembered those “whose lives were forever changed that day,” the first responders and survivors, the Pentagon personnel who reported to work the next day with a “greater sense of determination than ever before,” and the men and women in uniform who stepped forward to defend our country over 20 years of war, and their sacrifice. 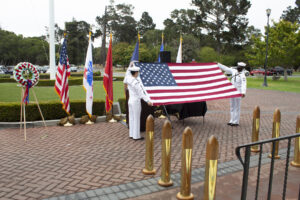 NPS Color Guard conducts a flag-folding ceremony during the 9/11 commemoration.

He then introduced Capt. Nyhus, a CHDS Master’s Program graduate, as a “first responder, a hero, who was there” at the scene of the attacks on the Twin Towers.

Nyhus, Commanding Officer of the NYPD HIS/ATF Task Force, remembered serving as a rookie cop on 9/11 and responding to Ground Zero. He said he never returned to the scene of the attacks after that, assigned as a rookie to other areas of the city, and initially felt bad about not helping with the ongoing recovery efforts. But he said eventually he realized that keeping the people of New York City safe elsewhere was an important charge. And he urged everyone to remember all those who died and were injured on 9/11, as well as those who continued to suffer the effects in the days, months and years to follow.

After those remarks, Capts. Bryan and Nyhus placed a wreath and members of the NPS Color Guard presented a flag-folding “in honor of the memory of those who perished that day; those we lost while they defended our great nation in the days and years that followed; and those who remain in harm’s way.” 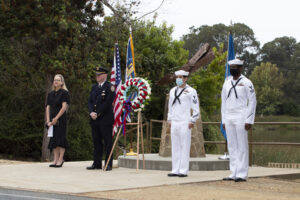 A wreath is placed at the NPS 9/11 memorial on the shore of Lake Del Monte.

After the Quarterdeck ceremony concluded, all guests were invited to take a reflective walk to the 9/11 memorial at the lake, constructed from a twisted piece of steel from the Twin Towers. Dr. Halladay addressed the crowd of faculty, students, and staff, commending them for their continued dedication to their missions and reminding them the work was not over. She then offered another commemorative wreath for Capt. Nyhus to place at the site.

CHDS has more than 3,000 alumni, as well as faculty and staff, many of whom responded to the 9/11 attacks in a variety of ways on that day and in the days, weeks, months and years that followed. Never Forget.