Coming of age in the war-torn former Yugoslavia, Croatian-American Natasha Haunsperger saw first-hand the mistreatment and assault of women and girls in her native land.

As a community engagement specialist for the Portland Police Bureau, the Center for Homeland Defense and Security alum has devoted her career to advocacy for women and girls in the U.S., a cause that has vaulted her into regional and national influence. 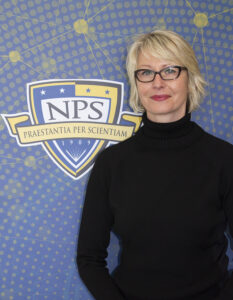 According to the Oregon Commission for Women website, the commission’s role is to “empower and support women through our role as policy advisors to Oregon state policy makers and leaders” as a “catalyst that empowers partnerships between state government and women in rural and urban areas to ensure success for all women by addressing issues at the policy level.” The commission’s mission, according to the website, is to “work for the implementation and establishment of economic, social, legal and political equality for women and to maintain a continuing assessment of the issues and needs confronting women and girls in Oregon.”

The NIJ LEADS program is a partnership between the NIJ, which operates under the U.S. Department of Justice and its Office of Justice Programs, and the International Association of Chiefs of Police (IACP), the RAND Corporation (RAND), and the Police Executive Research Forum (PERF) aimed at encouraging the use of “evidence-based practices to advance criminal justice and the next generation of American law enforcement leadership.”

Haunsperger said she plans to leverage the two high-profile appointments to advocate for policies and strategies aimed at empowering women and girls in civic life and in criminal justice – especially immigrants, people of color and other “marginalized” communities, elevating their voices and causes in the process.

“My vision is to reemerge issues universal to women and girls,” she said, including promoting women in leadership, policy and engagement, and on issues ranging from socio-economic to reproductive health and criminal justice impacts.

Haunsperger said her experience at CHDS was a lynchpin in her seeking and earning the appointments through its focus on “innovation and critical thinking” skills.

“(CHDS) allowed me to transition or grow from an operational mind-set as a police officer to thinking more strategically,” she said. “I attribute that transformation to think more strategically to CHDS. I’m now able to influence change on a much higher level.”

She said she expects to maintain a “lifelong relationship” with the CHDS program. 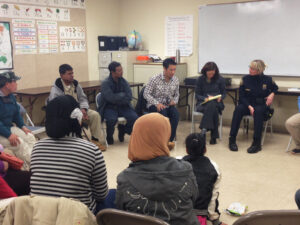 Haunsperger noted that after her CHDS Master’s program experience, she was promoted to her current position working directly for the PPB chief in developing “community engagement strategies” instead of reacting to critical issues and challenges. Meanwhile, she said, the PPB is undergoing rapid change and dealing with a series of crises including racial justice protests, calls to defund the police, violent agitation by right-wing and left-wing groups, and the like.

As an example of an issue she wants to address, Haunsperger noted the recent “extraordinary” rise in gun violence in Portland, which she said has affected the African-American community the most, and argued that the issue needs Black female voices and policies that represent their concerns.

In addition, she said she wants to address the issues of “justice-impacted” women including female prisoners, arguing that there isn’t enough academic research supporting advocacy for women.

To that end, Haunsperger said she is already engaged in a “refugee women empowerment group” pilot project that works with a diverse group of women from marginalized communities, including immigrants, people of color, and multiple faiths.

Ironically, the 15-year veteran Portland police officer said she first learned about the state Commission for Women while researching her CHDS Master’s thesis, which is entitled “Foreign-Born Human Trafficking – A Dark Spectre Haunting America: An Examination of the Sex and Labor Trafficking Landscape” (2020). The thesis was nominated for an Outstanding Thesis Award. 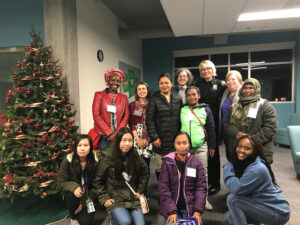 New refugee women arrivals celebrate a month after settling in the U.S.

Meanwhile, Haunsperger said the NIJ LEADS program appointment is especially valuable because it offers access to strategic and technical support that the PPB is not currently capable of offering because she said it is in “crisis management” mode, and allows a focus on longer-term, five-year strategies for addressing issues.

Haunsperger was in her mid-teens living in a mixed-ethnicity household with a Serb Orthodox father and a Croat Catholic mother in Osijek, Croatia when the former Yugoslavia collapsed into nationalistic factions in 1991, starting a bloody 10-year war that saw widespread genocide and other human rights abuses. She fled with her sister to Serbia as a war refugee due to being assigned her father’s status as a Serb and lived in a refugee camp.

Haunsperger eventually enrolled at the University of Belgrade in Art History and when United Nations peacekeeping troops arrived a few years later she began working as an interpreter and cultural liaison for the U.N. police.

In 2001, Haunsperger got married and emigrated to Oregon.

In her current position, she works on addressing complex criminal justice-related issues with immigrant and refugee communities in the Portland Metro area, and created a unique police program focusing on connecting police officers with newly arrived refugees and immigrants as part of an effort to build trust, promote cultural awareness, and welcome and help new arrivals with the integration process.

She earned her B.A. in Russian Language from Portland University in 2004, and in 2015 was a recipient of the Rotary International Peace Studies scholarship and completed a three-month course in “Conflict Resolution and Peace Studies” at the Chulalongkorn University in Bangkok, Thailand.