Delayed by the Covid-19 pandemic, Center for Homeland Defense and Security alum M. Carl Makins’ proposal to form a multi-disciplinary, multi-agency unit capable of protecting South Carolina’s maritime domain is still alive thanks to his own determination.

Prompted at least in part by an hours-long shutdown of a section of the Port of Charleston, Makins’ Special Maritime Action Response Team (SMART) port security initiative was the focus of Makins’ CHDS Master’s Program thesis in 2019. The thesis is entitled, “Revitalizing Maritime Security: Is SMART the Next Element?”

Shortly after the Charleston County Sheriff’s sergeant graduated from the program, Makins (Master’s 1803/1804) began the process of introducing and seeking funding for his SMART proposal to local, state and federal officials, including all the way up to U.S. Sens. Lindsey Graham and Tim Scott.

But then the pandemic reared its head, taking with it all attention and funding starting in early 2020, and bringing all progress on Makins’ thesis recommendations to a “screeching halt,” he said.

Makins noted that the pandemic effectively shut down the nation in many ways, affecting transportation and the economy, reducing the amount of port traffic and the obvious need for maritime security.

In addition, Makins said political changes at the local and national level have “shifted attention away from projects like SMART,” including in his own department where a new Sheriff Kristin Graziano defeated longtime Sheriff Al Cannon (ELP 0901) last fall.

Add to that the media focus on police-involved fatalities, the “defund the police” movement that cost law enforcement staffing levels and made tactical operations unpopular, and other highly charged domestic political issues, and Makins said he faced major headwinds in getting his proposal attention.

“It’s hard to get action on something seen as a hypothetical when there are more immediate issues,” he said.

So he’s essentially starting from scratch with his outreach, though he said there are positive signs including that staffing levels in his own department are poised to recover in the next month or so.

“Locally, in 2021, we have a new administration, and face-to-face talks have just begun to happen,” Makins told CHDS. “I have a finished product in my thesis. Now I have to present it to brand-new leadership across multiple levels of government and homeland security agencies. I hope that this Fall I can get the project back on track during the mid-term elections. I am seeking funding to support this initiative since the country is opening and the threat is still there.”

A military veteran who served 21 years in the U.S. Navy and 12 years in the U.S. Air Force, Makins has developed a broad portfolio of expertise, including Charleston Metro bomb technician, scuba diving instructor, UAS program coordinator, SWAT Perimeter Element Leader, and more, and is one of only several dozen FBI-certified maritime bomb techs in the nation.

Applying to the CHDS Master’s Program, Makins said he was looking for a homeland security issue to solve. 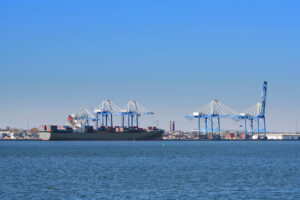 So when the Port of Charleston’s Wando terminal was shut down for about seven hours in 2017 after a dirty bomb hoax from a YouTube conspiracy theorist involving the container ship Maersk Memphis, Makins saw an opportunity.

Makins said the local response to the dirty bomb threat was “not really a good one,” noting that it took far longer than it should have to investigate and re-open what he called “one of the most robust ports” in the region. He estimated the closure cost the port about $100,000 per hour in revenue. In addition, Makins said the port gets regular calls reporting bomb threats, particularly involving military ordnance during harbor dredging operations.

“I foresee that we’re not equipped to handle an attack or incident,” he said. “I said (during the bomb hoax) it would be nice if we had a team to handle this.”

Makins’ SMART proposal calls for a trained “tactical team” to respond quickly to port security threats. He noted that there are various agencies with response capabilities, including the U.S. Coast Guard, but none with the proposed tactical and logistical capabilities and training of the SMART squad.

If a SMART team had been in place during the 2017 bomb hoax, Makins said he’s sure it could have “boarded the (container) ship, attacked the problem, and cleared it up faster.”

While the SMART team could be created as a part-time entity, Makins said it would not be as efficient. “If you only do one thing you get good at it,” he said. “When you’re training all the time it’s a walk in the park. Terrorists and criminals aren’t part-time.”

In his thesis, Makins examines the process of forming a SMART entity within Project Seahawk and its Interagency Operation Center, which operates as a multi-agency program within the confines of the U.S. Coast Guard and “brings state-of-the-art technology and a regional approach to the problem of port security critical infrastructure” in Charleston, S.C. The SMART team would use intelligence gathered by the Seahawk IOC.

According to the thesis, the SMART concept “will make Seahawk more efficient in handling maritime criminal threats to radiation detection in Charleston by providing the first responder with an avenue of options.”

Together, the Seahawk IOC and SMART will be a “one-stop shop for interagency maritime security in Charleston,” the thesis says.