For more than 230 years, the U.S. Marshals Service has been in charge of providing judicial security for federal courts, including some 2,700 federal judges today. But it has only been relatively recently that U.S. Marshals reported a “dramatic increase” in threats against judges, prosecutors and other court officers.

With social media amplifying threats against judges, and their personal identifying information including home addresses available online, the U.S. Marshals Service has recorded about 3,000 potential threats or “inappropriate communications” against judges, members of the judiciary, and federal facilities on average over the past five years , according to an October article in ABA Journal.

And that’s just federal judicial officers and facilities, not including state and local judges and courts.

Center for Homeland Defense and Security alum John Muffler (ELP1102), a retired U.S. Marshal and former administrator of the USMS National Center for Judicial Security, talked with CHDS about the rising threat against federal, state and local judges and other judicial officers, what that means for U.S. democracy in general, and what can be done about it. 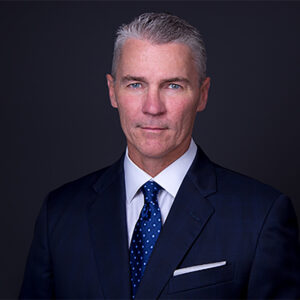 In addition, retired Los Angeles County Superior Court Judge James Brandlin, who now serves as the court’s director of public safety and has collaborated with Muffler on teaching and writing articles on judicial security in a variety of publications, offers his own perspective on the issue.

Muffler, who now owns the workplace and schools threat assessment and security firm Aequitas Global Security, said the rising tide of threats against judges and courtrooms across the nation is a key issue because it “impacts the rule of law in a democracy. If a judge is worried about how a decision affects their own safety and that of their family, it really affects democracy.”

He also argued that an independent judiciary is essential to the homeland security enterprise.

“As a nation, where would we be without a protected and independent judiciary (at all levels)? CHDS covers infrastructure, border, emergency management, natural disaster, terrorism, public safety pieces, etc., exceptionally well. Court and judicial security has been a missing piece, not just at CHDS, but across all levels of government. Many, if not all, the silos that existed at 9/11 have been bridged, (but) that is not the case county to county, state to state, across the U.S.”

CHDS Executive Leaders Program director Sara Kay pointed out the rise in the past few years in domestic terrorism the courts are seeing, including groups who don’t believe in the validity of U.S. laws or the court system, noting that the Department of Homeland Security and the federal government have identified domestic terrorism as the top risk to the nation and the “risk is certainly elevated for the courts as beacons of democracy and governance.”

Muffler said people going after judges and other judicial officers is different than threats to other government and elected officials from the federal, state and local levels because judges are the ultimate decision-makers, and their rulings typically have a more significant effect on people whether it results in a jail or prison sentence, loss of child custody or loss of income and wealth.

As a result, a judicial ruling can lead a defendant, litigant, or member of the public to take the ruling personally, to seek redress of their grievances, and to act out in response, he said.

Meanwhile, he said, the spread of social media use and the availability of personal information online can make it easier for someone to plan out and threaten or even carry out an attack, as evidenced by several recent attacks – some of them deadly – on judges in the past decade or so.

Judicial security is crucial for an independent judiciary and the rule of law in a democracy.

Federal judges have been seriously injured or their family members killed in attacks over the past several years by litigants in cases they presided over, including Judge Joan Lefkow whose husband and mother were fatally shot at her home in 2005; Texas state court judge Julie Kocurek who was shot in the driveway of her Austin, TX home in front of her teenage son but survived multiple gunshot wounds and returned to the bench a year later; and most recently, U.S. District Court Judge Esther Salas’ 20-year-old son was murdered at her home in July last year.

Salas and Lefkow made pleas for more protection for federal judges, and Muffler said there has been some progress on that count at the federal level, noting federal legislation backed by then-U.S. Sen. Barack Obama in response to the attack on Lefkow that provided funding for home security systems for judges’ homes, and congressional legislation backed by two New Jersey U.S. Sens. Bob Menendez and Corey Booker in response to the attack on Judge Salas and her family that would place limits on the availability of judges’ personal information.

Unfortunately, Muffler said, the public typically only pays attention to judicial security when there are attacks on judges, and the issue often quickly fades out of the public spotlight.

Muffler said he met Judge Kocurek shortly after she was shot and he said she was the “rare” recipient of a direct threat against her, but the threat never reached her because a local law enforcement official deemed it “not credible.” It reminded him of a recent media report that made it seem like a Delaware judge was solely responsible for releasing a convicted murderer when the release was actually being done on a technicality and was influenced by a probation report.

According to Muffler, social media has made judicial security more challenging because of its ability to spread discontent and even misinformation widely. As much as some of them may want to reply to negative or inappropriate posts, judges are generally not allowed to due to the canons of judicial ethics.

“Information,” he said, “is currency for someone who wants to act (against judges).”

In addition, social media has what he called a “snowball effect” with hundreds and even thousands of people aware of and potentially upset by a decision rather than just a few, especially with regard to rulings on high-profile issues such as the George Floyd murder trial, the Trump administration travel ban, immigration, and the like.

Meanwhile, Muffler said the public’s increasing politicization of the courts and lack of respect for institutions is also playing a role in judicial security, noting that judges are increasingly being viewed as either Republican or Democrat and noting that a recent survey of judges found that about nine out of 10 say judicial independence is being threatened.

Politics, he said, is an important factor because while it’s difficult to prove “cause and effect” involving “negative rhetoric” and attacks, it does affect people.

As a result of increasing threats and the public atmosphere in which judges operate, Muffler said he supports major restrictions on the availability of judges’ personal information, while also warning judges and their families to take measures themselves to avoid releasing such information.

Privacy protections for judges is the “biggest weak link nationally” in judicial security, Muffler said, noting that some states such as Illinois, Texas and California have such protections but most do not.

And, Muffler said trained law enforcement officials should be in charge of protecting judges while he also advises judges to take a proactive role in their own security.

Muffler advises judges on everything from the elements of fairness, including neutrality, respectfulness, voice, and trustworthiness, to the “pathway to violence” for potential attackers including grievance, ideation, research, preparation, breaching, and attack.

It’s essential, he said, for trained law enforcement to act when a threat manifests itself, including by conducting a protective intelligence investigation including a threat assessment ahead of any potential attack. Such proactive measures typically “don’t get to handcuffs,” Muffler said, and more often result in a watch or wait threat management scenario, possibly a mental health evaluation.

Muffler said he also supports creation of a national database for threats and attacks against judges and judicial officers, noting that there is currently no national repository of such information.

Meanwhile, Judge Brandlin agreed with the U.S. Marshals that the “number of judicial threats and attacks on judicial officers and others involved in our justice system has increased dramatically,” and also agreed that “respect for the rule of law, in my opinion, has diminished over the last few decades and political rhetoric only increases the danger to judicial officers.”

“With the exception of some elected officials and celebrities, judicial officers are at the highest risk for targeted violence,” he said.

Brandlin said since judges are clearly at a higher risk now than in the past it requires them to “maintain vigilance, be proactive, and take ownership over their own security.” He noted that, unlike some other elected officials, judicial officers rarely have security teams to protect them away from the courthouse, so he said judicial privacy protection becomes the “first – but certainly not the last – line of defense.”

Asked if the public has any right to judicial officers’ private information, he said, “absolutely not. There’s no legitimate need for the public to have access to that information. Keeping judges’ addresses private is of utmost importance.”

Brandlin called the Internet a “curse when it comes to judicial security,” noting the “relative ease in finding a judge’s home address has resulted in the murders of judicial officers and their families, as well as threatening mail and email, “doxing” of their personal information on the Internet, and protests outside their homes.

He said all judicial officers should take steps to protect their home addresses from being easily discovered, and consider other techniques including taking title in an alias trust, excluding their names from utility bills, using a P.O. Box for mail, and opting out whenever possible from publicly accessible databases.

He also argued that judges should “practice situational awareness, namely being cognizant of what is happening around them, have a plan, and always treat everyone with respect to mitigate feelings that someone on the losing end of a case feels that he or she was treated unjustly.”

Brandlin did say there has been progress on the judicial security issue, noting that when he first started teaching the subject to judges in the early 2000s he asked who had taken security measures and “very few” had done so. By 2018, he said, the “vast majority” had a home alarm and about three in 10 had a home security camera installed.

“I think there’s a greater sense among judicial officers of awareness about the need to protect themselves and their families,” he said. “Has society done everything it could? I don’t think so.”