Leonardo DaVinci once said that, “All great acts of genius began with the same consideration: “Do not be constrained by your present reality.”

That’s the thinking behind two notable thinkers, Alfred Nobel in 1896, who was famous for his invention of dynamite and also for launching a rocket with a camera on it, and Nikola Tesla in 1898, who thrilled onlookers in Madison Square Garden by operating a radio-controlled boat with direction navigation and flashing lights.

So novel and forward thinking was the latter that many thought Tesla had the power of telekinesis, or possibly a trained monkey on the inside of the tiny boat. 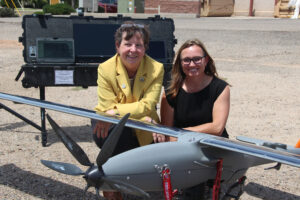 These two inventions were probably the first camera and lights on unmanned systems in history.

These historical moments gathered by Consortiq also note that in 1935 the first modern drone was developed as a simulation of engaging enemy fighters by the Royal Air Force in the UK, called the Queen Bee.

The Queen Bee was a radio-controlled drone developed for aerial target practice. The term, “drone” was coined as a hat tip to the Queen Bee by U.S. Commander Delmar Fahrney as he led efforts for a similar US program.

Fast forward to 2006, when drone advocates saw Unmanned Aerial Vehicles (UAVs) or drones allowed in U.S. airspace for the first time to follow and assist with search and rescue and disaster relief efforts during the devastation of Hurricane Katrina.

Turns out, this would be the first of many iterations and innovations by security and emergency professionals, including alumni from the Center for Homeland Defense and Security at the Naval Postgraduate School. 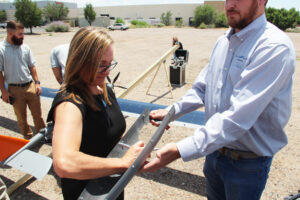 CHDS alumni such as Steven Polunsky, GB Jones, Cathy Lanier, Angi English and Jackie Lindsey are taking to the sky, using drones for a variety of purposes.

And, 56% of all unmanned aerial systems or drones are used primarily by municipal jurisdictions, while 39.8% are used by county jurisdictions.

Meanwhile, in the private sector and military domains, unmanned systems are projected to be big business with increasingly sophisticated sensor and geolocation technology. 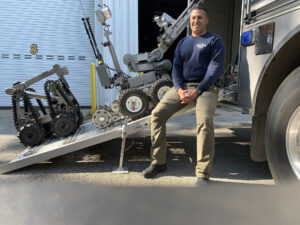 In January of 2021, The Pilot Institute’s data analysis notes that from a market size of $4.4 billion in 2018, the commercial drone market is expected to grow to about $63.6 billion by 2025, $13.6 billion in the U.S. alone. Some experts estimate the 2025 value to be as high as $82 billion, at the same time generating more than 100,000 jobs. From 2016 to 2020, the demand for drones by various military units around the world reached a value of $70 billion. The growth of military demand is driven in large part by increasing border security issues and transnational security threats.

Along with the proliferation of drone use, there are increased chances of drones being used for nefarious purposes such as smuggling, illegal surveillance, blackmail, or to disrupt airport operations. This battle will be waged on two fronts – legally and technologically.

As the recently announced Remote ID attests to, the FAA is well on the way to establishing a true system for managing unmanned aerial traffic.

This is a future that drone manufacturers are likely already preparing for, yet alumni are not waiting and are on the forefront of the use of unmanned systems of all types in public safety.

The ability of unmanned systems to be a powerful tool for various uses have not been lost on CHDS alumni. Instead, they’ve leveraged these powerful tools to meet the needs of the 21st Century. 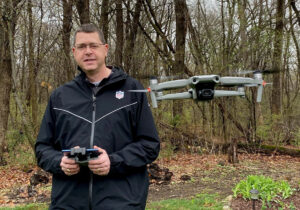 Steven Polunsky (Master’s Program 1403/1404, HSx 1701), Director of the Transportation Policy Research Group as the University of Alabama, is using drones at the Institute to train 15 students, faculty, and staff as drone pilots. He states, “We are proud to offer this useful training for transportation researchers to augment their existing skills and knowledge.” Moreover, he added, “we use drones for research, remote sensing, and photography, and the transportation industry for infrastructure inspection is increasingly widespread.”

This collaborative effort with the Institute and the University of Alabama at Huntsville, the lead institution for disaster preparedness and response research, provided insight into the safe integration of UAS into the disaster preparedness and response areas. UAH recently received a $1.1m FAA/ASSURE grant to focus on procedures to coordinate with the Department of Interior, the Department of Homeland Security, the Federal Emergency Management Agency and other federal, local and state organizations to ensure proper coordination during emergencies.

In addition, the FAA recently selected the Huntsville International Airport as one of four locations across the country to serve as a test site for drone research, in particular for the “Airport UAS Detection and Mitigation Research Program.”

GB Jones (Master’s Program 1401/1402) is currently the Director of Investigations and Security Services – International & Special Events for the National Football League. Prior to joining the NFL, Jones was Vice President and Chief Security Officer for Terra Vigilis Security Group, a specialized security company with emphasis on aerial security, counter-drone operations, and integrated security solutions. Jones retired from the Federal Bureau of Investigation (FBI) in May 2019 after nearly 23 years of service.

In March 2020, he joined another CHDS alumni Cathy Lanier (Master’s Program 1401/1402), who is currently NFL Senior Vice President and Chief Security Officer, and he now provides emergency planning and airspace security planning in support of all NFL games and events, including international overseas games.

“In my NFL role …,” Jones states, “I do a lot of evaluation of drones and drone detection systems, to provide guidance and expertise to the clubs, teams, and stadium operators, about existing and emerging technologies. We are also exploring the safe integration of drones into the game day experience for not only security but also for broadcasting, event operations, entertainment, marketing, and other business use cases.”

Jackie Lindsey (Master’s Program 1601/1602), Fire Chief of Santa Fe County, was on the forefront of unmanned systems technology in 2019 when she facilitated a half million-dollar drone program for the State of New Mexico.

As former New Mexico Secretary of Homeland Security and Emergency Management, Lindsey acquired two fixed-wing drones made by Silent Falcon to conduct border security and all aspects of emergency management. The Silent Falcons fly at 10,000 feet to identify the scope of large incidents on the ground, such as wildfires, floods, pre-event mapping, humanitarian support, search and rescue and locating migrants transiting open stretches of desert.

With a wingspan of 14 feet with solar panels, these drones stay aloft across New Mexico rural areas for several hours.

Lindsey noted that “this cutting-edge technology allows us to better address the safety and security needs of New Mexicans and all who travel to our state. Our drones allow the Department of Homeland Security and Emergency Management (DSHEM) to determine the scope of incidents from the air and more immediately coordinate response and recovery.”

As denoted on the website of DRONERESPONDERS, the Board of Advisors “includes many of the best and brightest minds engaged in UAS operations and program management for public safety. Their job is to help ensure that DRONERESPONDERS serve the greater good as the premier source of public safety UAS research and knowledge.”

Klok is a bomb technician for the Gwinnett Police Department in Lawrenceville, Georgia, who responds to approximately 120 calls per year, mostly for examinations of suspicious packages. But he reports his unmanned ground vehicles have been used for SWAT support by providing robotic entry surveillance and two-way communications with suspects.

Interestingly, in hazardous materials situations, Klok uses sensors on the UGV to type what kind of hazardous materials are present in any given situation. Because of Klok’s long history of working with UGVs, he predicts that the next innovations likely for unmanned ground systems will be “smart robots” with more autonomous features. Klok states that “the most significant potential for the enhancement of bomb disposal robots perhaps rests in the robot’s ability to manipulate objects with fine motor controls, much like a human being.”

Haptic technology is emerging on bomb disposal robots to provide the robot operator tactile feedback that creates the sense of touch through force, vibration, and motion sensors. Increased dexterity of robotic manipulators will be of great importance to bomb disposal robots. The need to more easily unzip a backpack cannot be understated, especially in the aftermath of the Boston Marathon where hundreds of backpacks were left behind after the explosions were investigated.

Klok received his bomb technician certification from the FBI Hazardous Device School. He primarily uses the Remotec Andros F6 and the ICOR T5 series in his work.

Klok notes “larger and heavier EOD robots are more prevalent in domestic bomb disposal where there is a need for more robust capabilities such as investigating potential Vehicle Borne IEDs (VBIED) and suspicious packages. Either way, small or large, the basic need of all bomb disposal robots is the same; keep the human body out of harm’s way.”

Klok reports that “the Andros F6 series robot is a workhorse, and it is the robot most often utilized” at the Hazardous Devices School at Redstone Arsenal, in Huntsville, Alabama. Redstone Arsenal is the only facility in the United States that trains Public Safety Bomb Technicians (PSBT) of which Klok is a graduate.

Various alumni have also crafted theses such as Darren Price (Master’s Program 1405/1406), whose thesis “Unmanned Aircraft Systems for Emergency Management: A Guide for Policy Makers and Practitioners” (2016) was an Outstanding Thesis Award Nominee.

Price posits in his thesis that “responding to disasters is a critical function for first responders and the emergency management community. The primary mission when responding to disasters is saving lives, which often requires the use of multiple resources. Rotary and fixed-winged aircraft have traditionally performed disaster response missions, such as overhead damage assessments, reconnaissance, and missing person searches. However, with the advancement of unmanned aircraft systems (UASs), there is an opportunity to perform many conventional aerial missions in a safer, more expeditious, and cost-effective manner.”

Since completing his thesis in 2016, Price has published articles on the use of UASs for emergency management with the International Association of Emergency Managers and in the Domestic Preparedness Journal. He has also conducted numerous presentations related to his thesis, including before a North Atlantic Treaty Organization (NATO) Specialists Meeting.

Programmatically, Price has worked with local emergency management agencies on the development of their UAS programs, including drafting policies and standard operating procedures for UAS implementation in a disaster response and recovery environment.

Moore wrote that “nonmilitary uses for UAS range from agriculture services to entertainment purposes and include tasks as mundane as inspecting gutters and as consequential as fighting fires. Outside of the safety issues that accompany many breakthrough technologies, the effort to integrate UAS into national airspace is enmeshed in political, legal and economic policies that require careful navigation. Factors like cybersecurity and technological advancements will continue to influence the way UAS can be used. (The) thesis provides an orientation to the key considerations in UAS integration.”

Clearly, these alumni are not “constrained by (their) present reality,” as Da Vinci advised. The future is bright for continued innovation from these alumni and future alumni in the use of unmanned systems for good in our local communities and nation overall.