After more than 15 years guiding the Center for Homeland Defense and Security’s Executive Leaders Program (ELP) from inception to execution to expansion, Ellen Gordon has retired.

“Ellen so much deserves her time away after the extraordinary contributions she’s made to the profession, our Center, and the nation,” CHDS director Glen Woodbury said. “She has left her mark on numerous national policies, the long-lasting achievements of her profession and, most importantly, the hundreds of students she’s positively impacted.”

Gordon, who joined CHDS in 2004 as an associate director of executive education programs after previously graduating from the Center’s pilot Master’s program in 2003, retired on April 1 as the only program director the ELP has known since its beginning. 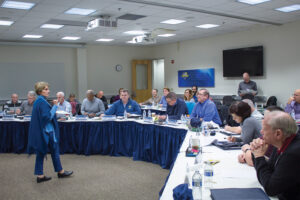 Gordon called working at CHDS the “highlight of my career,” which spanned more than four decades in homeland security and emergency management and said the chance to help build and grow one of the institution’s educational programs was a “once-in-a-lifetime opportunity.”

“We started with a blank sheet of paper,” she said. “Seeing CHDS grow over the years has been a real pleasure. It’s grown so much greater, than I would have ever expected. I didn’t necessarily see it as a career, but more as an opportunity to contribute and to pay forward. We were creating a world-class organization, and I believe it is a world-class organization, and striving for excellence in all we did throughout the years was of the upmost importance.”

Gordon said she was attracted to CHDS because it was not a “typical hierarchical government organization,” and encouraged working together as a team with communication and collaboration.

She said she treasures the “lifelong” friendships she made, over the years, at CHDS with everyone from colleagues, guest speakers, and experts to the participants and students.

Gordon said she’s leaving CHDS because it is “time to move forward into the next chapter of my life” while she still enjoys good health and is already turning down consultant job offers to focus on golf, hiking and kayaking and maybe just doing nothing. “I like to think that I am still in good shape and I want to enjoy the rest of my life,” she said.

Senior consultant David O’Keeffe said Gordon’s expertise and presence developed over decades in emergency management made her the “obvious choice” to create and lead the fledgling CHDS Executive Leaders Program. Gordon influenced everything about the ELP, including not only the “session topics but also the culture,” O’Keeffe said, from “content to the learning environment.”

“Ellen is very well-respected,” O’Keeffe said. “She has a sense of the homeland security landscape. Ellen brought an executive presence and an executive perspective to the classroom.”

O’Keeffe noted Gordon’s “wisdom and mentorship” over the years as a “facilitator and a role model, especially for female leaders.”

Gordon’s influence at CHDS was widespread. During her time at the Center, she not only led the ELP, she also served as the lead for the Radiological Emergency

Preparedness Program and served as a co-instructor for Emergence and the Master’s Degree Intro course.

Assistant Associate Director of CHDS Education Programs Sarah Bentley said she was privileged to work with Gordon for the past 15 years in support of the Executive Leaders Program, and lauded Gordon as an “advocate for lifelong learning” who was constantly developing program content in a way that would “elicit critical thinking and expand existing perspectives on issues.”

“She would frequently ask a speaker the ‘So what?’ question to ensure that everyone in the class found relevance in a topic or discussion,” Bentley said. “Ellen’s empathic ability to read a room helped nurture opportunities for participants to learn from other disciplines. I wish her well as she retires; even though I’m losing her as a colleague, I’ve gained a mentor and friend in the process.“ 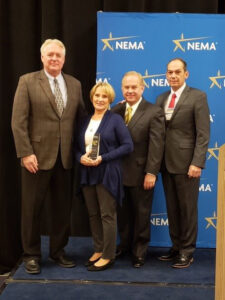 “Throughout her career, Ellen brought field-tested practitioner experience, critical thinking, and no-nonsense decision-making to every conversation she had,” Wilson said. “Whether leading a discussion in the CHDS classroom, advising elected leaders during a disaster response, or serving on national commissions and advisory groups, Ellen has offered invaluable advice to the leaders of this country.”

Woodbury adds that “Ellen’s leadership and expertise were instrumental in guiding national policy towards wise and achievable outcomes.”

Gordon received the Curtis H. “Butch” Straub Award for exemplary achievement and leadership upon graduating from the CHDS Master’s Degree program, and the Lacy E. Suiter Distinguished Service Award from NEMA for her outstanding contributions to emergency management, as well as the U.S. Army Commander’s Award for Public Service and U.S. Army Civilian Award for Humanitarian Service, among other awards.

She is an inductee into the International Women in Homeland Security and Emergency Management Hall of Fame.

Gordon graduated from Truman State University, Kirksville, Missouri with a Bachelor of Science degree in Law Enforcement and Corrections (criminal justice), and holds a Master of Arts degree in Security Studies (Homeland Security and Defense) from CHDS-NPS.