U.S Capitol Police were anticipating a large protest in the days before the Jan. 6 riot at the Capitol, but not a coordinated “insurrection,” and planning and response efforts were hampered by oversight bureaucracy and politics.

That’s according to former U.S. Capitol Police Chief Steven Sund, a Center for Homeland Defense and Security alumnus (Master’s Program 2011 graduate) who offered rare insight into the Capitol riot during the monthly CHDS Alumni Hour on May 20. 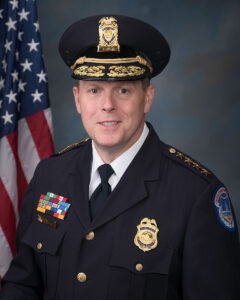 Sund said Capitol Police were expecting a large crowd for Jan. 6, the day Congress was set to certify the election of President-elect Joe Biden, noting what he called previous “MAGA 1 and MAGA 2” protests in November and December. He said there was already a need for heightened security with Vice President Mike Pence, Speaker of the House Nancy Pelosi and a full U.S. Senate and House of Representatives on hand for the election certification.

One of the largest police forces in the nation with 1,900 officers and 340 civilian personnel was geared up for the anticipated protests under Sund’s guidance even though it was already short by 200 officers. Sund said he requested an emergency declaration three days before the Jan. 6 riot, and reached out to D.C. National Guard Gen. William Walker for support while exchanging incident command information with a range of agencies.

Sund said his relationships and partnerships formed through the CHDS network were invaluable both before and after the Jan. 6 riot.

“This (CHDS) program has been a godsend for Capitol Police, and I certainly appreciate everything,” Sund said. 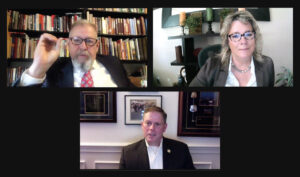 Meanwhile. Sund said he knew in advance there would be a need for a wide perimeter around the Capitol building and had requested the National Guard to support the perimeter on Jan. 3. But the coordinated attack by what Sund said were about 300-400 instigators who were seen using radio communications, hand signals and the like was not expected.

Sund said even the timing of the Capitol riot, at 12:53 p.m., appeared to be planned to coincide with President Trump’s address to a crowd of his supporters at the White House, expecting that Capitol Police may be at less than full staffing on the perimeter.

Alumni Hour moderator and CHDS instructor David Brannan pointed out that there is now a “new normal” with regard to protests that made it virtually inevitable they would devolve into violence, not because protesters got out of hand but because of malign riot organizers infiltrating legitimate protesters and directing coordinated attacks.

Sund said that was among a lot of the takeaways from the Jan. 6 riot, including the need to stay up-to-date on after-action reports.

Other challenges Capitol Police faced, according to Sund, was the oversight bureaucracy that made it difficult to get timely resources, the political resistance to using more effective riot gear and reluctance to use the National Guard.

Sund said in addition to a Capitol Police Board, department leadership also had to run a gauntlet of four Congressional oversight committees to get additional staff and other resources. 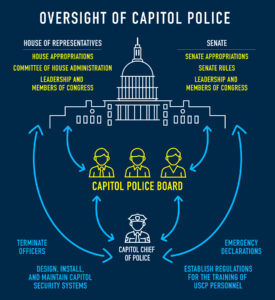 And he said the 2020 summer protests following the death of George Floyd at the hands of a Minneapolis police officer had spawned complaints about law enforcement response and the use of the National Guard to assist local law enforcement during the more violent protests in big cities, which he said had left a “bad taste” among top officials including at the Department of Defense.

When the Capitol rioters were attacking us and the building, Sund said, he requested additional support including from the National Guard, seeking authorization from the Congressional Sgts at Arms, which also went to the Pentagon, and there were significant delays in both cases.

When the National Guard finally arrived, Sund said Capitol Police already had the situation under control.

Asked how he would suggest dealing with the potential for radical ideology in law enforcement, especially since right-wing groups like the Oath Keepers, Proud Boys and Three-Percenters had played high-profile roles in the Capitol riot, Sund suggested police forces might need to implement an internal threat analysis program similar to the TSA.

However, Sund also warned about the emerging politicization of police, including the Defund Police and Police Reform movement, arguing that local officials could face similar restrictions to what he faced on January 6, placing them and their officers in a no-win situation.

Asked if he had been treated fairly, Sund said he understood the events of that day and how they can impact the head of an agency. He added that he was just sorry for what his Capitol Police officers had to endure during the Jan. 6 riot. 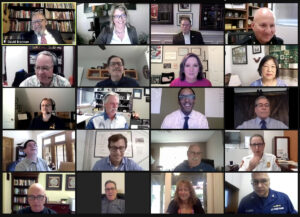 Brannan reminded Alumni Hour attendees that “Monterey Rules” applied to the event which allowed for an open and frank discussion of the riots, and he praised Sund for being willing to express his thoughts.

University of New Haven (CT) adjunct faculty member Ronnell Higgins, a CHDS alumnus (Master’s Program 2017 graduate), said what stood out with regard to Sund’s Alumni Hour discussion was “it was authentic.”

“What’s missing (from the national conversation) is the ability to speak and to share candidly,” Higgins said. “‘Monterey Rules’ is a powerful concept. It’s what binds NPS graduates together.”

CHDS strategic communications director Heather Issvoran called Sund a “true leader” for his willingness to discuss the details of the Capitol riot.

“In a world so divided, this is what we were meant to do,” Issvoran said.

Sund said his goal is “to make sure this never happens again.”

Over the past several months, the monthly CHDS Alumni Hour series has included the following topics and alumni guests:

Jan. 28, “The Common Good,” What is it? Does it still exist? Does it need to be restored? A classroom-style discussion with CHDS instructors Dr. Chris Bellavita and John Rollins.

Dec. 17, “What should be the Homeland Security priorities for the next administration?” With guests CHDS Director Glen Woodbury, and Alicia Tate-Nadeau, Acting Director for Illinois Emergency Management Agency.

Nov. 19, “How have the challenges of 2020 provided us opportunities to innovate in our organizations?” With CHDS instructor Dr. Rodrigo Nieto-Gomez, and Deanne Criswell, New York City Emergency Management Department Commissioner at the time and now DHS-FEMA Administrator.