Two Center for Homeland Defense and Security alumni have made history with their appointments to top federal positions.

Criswell was confirmed by the U.S. Senate in a unanimous voice vote on April 22 and sworn in by Department of Homeland Security Secretary Alejandro Mayorkas on April 26.

She becomes the 12th FEMA Administrator since the agency’s formation in 1979 and will be charged with leading the agency’s mission of “reducing the loss of life and property, protecting the nation from all hazards and leading the nation through a comprehensive emergency management system of preparedness, protection, response, recovery and mitigation,” according to a FEMA release.

Criswell takes over the agency as it is tasked with coordinating Covid-19 vaccination administration, handling humanitarian efforts at the southern border, and preparing for future disasters, as well as challenges associated with climate change. 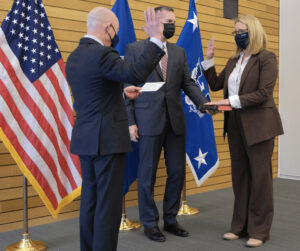 Deanne Criswell was sworn in as FEMA Administrator by DHS Secretary Alejandro Mayorkas on April 26.

In a statement, Sec. Mayorkas praised Criswell’s career as “one of commitment and service to our nation.”

“That commitment now rises to the next level of leading the dedicated people of FEMA as they continue working to meet unprecedented challenges,” he said. “I have full confidence in her ability to lead FEMA with compassion, fairness, integrity and respect as she works to fulfill the agency’s ever-important mission: helping people before, during and after disasters. It is my honor to welcome Administrator Criswell to the Department of Homeland Security.”

Criswell has more than 25 years of leadership experience in emergency management, including serving as the Commissioner for New York City Emergency Management, as a member of the Colorado Air National Guard and deployed to numerous disaster assignments with FEMA, according to an agency release.

She also worked as a local firefighter and managed the Aurora, Colorado, office of emergency management.

According to a FEMA release, Criswell said during her confirmation, “I believe the best way to balance the competing demands is to make risk reduction investments to build more resilient communities and infrastructure, including against the threat of climate change. As an emergency manager, I have always focused on keeping families and communities safe. There is nothing more rewarding than being able to help the people of this country.”

Walker was sworn in as the 38th U.S. House sergeant-at arms on April 26, and announced the arrival of Pres. Joe Biden to House Speaker Nancy Pelosi two days later when the President gave his first joint address to Congress.

Walker is a 39-year military career veteran, serving most recently as the District of Columbia National Guard’s Commanding General.

He also worked as a special agent for the Drug Enforcement Administration for decades, simultaneous to his National Guard service. 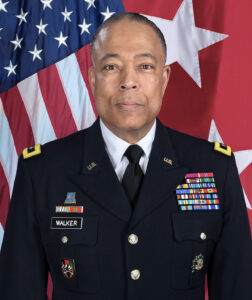 In a release issued in March, Speaker Pelosi lauded Walker’s “historic” appointment as an “important step forward” for Congress and the nation.

“Throughout his long, dedicated career in public service, General William Walker has proven to be a leader of great integrity and experience who will bring his steady and patriotic leadership to this vital role,” Pelosi said. “His historic appointment as the first Black American to serve as Sergeant-at-Arms is an important step forward for this institution and our nation. General Walker has 39 years of decorated military experience, including as current Commanding General of the DC National Guard.”

Pelosi also noted Walker’s career in the DEA and said his experience would be an “important asset” in keeping the Capitol protected.

“We are especially proud of his long-time career as a Special Agent with the U.S. Drug Enforcement Administration, where he served in roles from Special Agent to Deputy Administrator SES-4. His experience will be an important asset to the House, particularly in light of the January 6 insurrection. It is essential that we work to strengthen our institution and keep our Capitol community, and all who visit, safe.”

Walker was in charge of the D.C. National Guard during the Jan. 6 Capitol riots, and according to Roll Call requested permission along with Capitol Police and Metropolitan Police Department officials to send National Guard forces to defend the Capitol.

Walker told a March 3 joint hearing of Congress that about 150 National Guard troops, including a 40-person Quick Reaction Force, left waiting a short distance away “could have made the difference” by helping to extend the perimeter and push back the crowd, according to Roll Call.