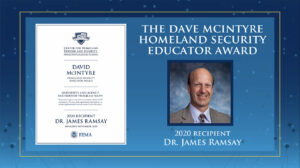 The award was established in the memory of noted homeland security expert and UAPP contributor Dr. David (Dave) McIntyre. The initial recipients exemplify his vision of identifying key issues in homeland security and homeland defense curriculum. The award was presented to Dr. James Ramsay, Professor & Chair at the University of New Hampshire’s (UNH) Department of Security Studies. CHDS-UAPP Director Steve Recca noted Ramsay’s qualifications, “Dr. Ramsay is a true thought-leader in homeland security education. From the very beginning of the effort to connect higher education with the homeland security policy and practitioner communities, Jim has engaged as a meaningful, sustained contributor. He has been and continues to be instrumental in building a body of knowledge leading towards homeland security theory. Jim’s efforts truly underpin the development of academic research and help mature the security profession. I can think of no better recipient of the first annual David McIntyre Homeland Security Educator Award.”

Dr. Stanley Supinski, CHDS instructor and thesis advisor, was announced as the Emeritus Recipient of the award, thanks to his efforts to help launch UAPP as the former director. Recca describes Supinski as the father of homeland security education. “Beginning with his work with U.S. Northern Command as the education director and his herculean efforts to form the Homeland Security and Defense Education Consortium, and subsequently as the founding director of the CHDS University and Agency Partnership Initiative (UAPP’s forerunner) in 2006, Stan built the framework for the homeland security policy and practitioner communities to engage with higher education. During his time as UAPI Director, Stan was critical to forming more than 250 homeland security academic programs around the U.S. and Canada. His hands-on approach truly provided credibility to these nascent programs. Through Stan’s efforts, we now have highly educated, capable practitioners and decision-makers to serve as the next generation of homeland security thought-leaders.”

While the award recognizes their contributions to UAPP and dedicated work in the homeland security arena, it’s also fitting that both men knew McIntyre well and respected him greatly. Dave was a frequent contributor to UAPP and unfortunately passed away last year. But his vision lives on—in the work of both Ramsay and Supinski. Ramsay first met McIntyre at a UAPI educational forum in 2006, and their relationship grew, “David and I exchanged thoughts on the growth and development of the HLS discipline. We talked politics, we published together, did presentations together and I frequently proofread his amazing scholarship at his request. David was a giant in HLS education and someone I looked up to since the day I met him. He was a very real role model for me, and I still find myself trying to emulate both his energy and vision for the field.” Coincidentally, Ramsay initially learned about UAPI and the Homeland Security and Defense Education Consortium (HSDEC) program from Stan Supinski, whom he met earlier that year while giving a talk at the University of Richmond on environmental security. 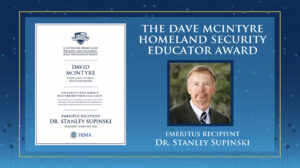 Dr. Stanley Supinski was the Emeritus Recipient of the David McIntyre Award.

While serving as either director or co-Director of UAPI for 11 years, Supinski developed a close relationship with McIntyre, “Dave and I were colleagues from the very beginning of UAPI and the effort to institutionalize homeland security education, dating back to 2005. He and I worked and traveled together frequently, and I considered him a close friend.” Yet, Supinski was still surprised to receive the recognition, “Dave was brilliant, one of the hardest working people I’ve ever known, and truly one of the most important figures in establishing homeland security as an academic discipline across the nation. When CHDS established an award in his name, I felt it was a great way to recognize his contributions and preserve his legacy truly; I am very honored and humbled to receive the inaugural award.”

Dr. Ramsay has been associated with UAPI/UAPP since 2006 and considers the partnership as formative to his career. “The UAPI/UAPP program has strengthened and enlarged my thinking, improved my professional network, provided numerous opportunities to engage and shape HLS education in the US, given me friends and a sense of belonging. With UAPP’s guidance, what was once a poorly understood, poorly defined, and emergent discipline without much structure has matured into a growing and relevant academic profession whose focus is to produce a national workforce capable of defending liberty and the free flow of people and commerce. It is perhaps one of the noblest professions, and I’m thoroughly proud to be part of it. Educating students to enter our field and contributing to our understanding of security is incredibly fulfilling.” Ramsay joined the University of New Hampshire (UNH) in 2015 to lead the creation of the homeland security bachelor’s degree program. It was the foundation for UNH earning its designation as a Center of Academic Excellence in Cyber Defense Education by the Department of Homeland Security and National Security Agency. He has over two decades of experience in occupational safety, public health, emergency management, environmental health, and security studies. Ramsay’s contributions make him an ideal candidate for the UAPP David McIntyre Award and an apropos way to honor his former friend and colleague. “There are so many gifted scholars, visionaries, and teachers in our community, and I certainly did not expect to be singled out. It was a total surprise and one that gave me a rather emotional pause because of the award’s namesake. And to be honest, I was not aware that the David McIntyre Homeland Security Educator Award had been finalized.”

Supinski noted that UAPI/UAPP has always played a leadership role in the homeland security education community while recognizing that a community is only as strong as its members. “Our willingness to share our practices with each other has made all of us not only better informed but also better at what we do as educators.” His lasting effect on homeland security education will continue to impact how we collectively learn, share, and apply the knowledge it requires to make our country safer and more resilient. “I believe HS education has truly come into its prime,” Supinski shared. “It takes time for educational programs to fully develop—getting the right mix of faculty and curricular content, connecting to the practitioner community, gaining full recognition from academic administrations, and numerous other factors. This community has achieved that, and it remains strong. I also think that it has proven adaptable, bending to changes in the threats to our security and how we as a nation have adjusted to better meet those threats.”