The latest installment of the Center for Homeland Defense and Security (CHDS) Alumni Hour explored the notion of “The Common Good.” We were joined by CHDS instructors Dr. Chris Bellavita and John Rollins to deliberate on one of our country’s founding virtues and examine why it is so critical to our communities and public service. The Alumni Hour is an hour-long virtual interactive discussion that provides a trusted place to discuss current challenges and smart practices for CHDS faculty, staff, students, and alumni.

While the past Alumni Hours were formatted to encourage open discussions between panelists and attendees, this version utilized breakout rooms to maximize interaction between participants too. After a brief introduction to the topic and a crash-course in Jamboard (a collaborative digital whiteboard), the 130-plus attendees were separated into breakout rooms to address the questions: 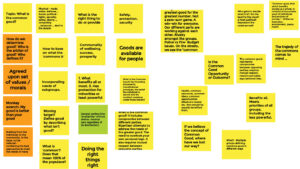 Groups in breakout rooms utilized Jamboard to share their ideas.

Groups in breakout rooms recorded their responses and ideas on Jamboard during a 25-minute dialogue, and then shared their results in a plenary discussion. Before going into breakout rooms, Dr. Bellavita reminded attendees to focus on the dialogue; noting it’s not a contest. “Consider an expanded and maybe shared understanding of what could be meant by the common good.”

The group responses on Jamboard show a wide range of interpretations of the common good.

When examining the question “Does it still exist?” there was less consensus across the groups. Some questioned if it ever existed while most conceded that the common good does still exist. Reflecting back on all the different responses to the initial question, it’s becoming increasingly difficult to define the common good. So, how do you prove something exists when we aren’t able to clearly define it? Yet it’s not just a theory—we have physical evidence in the form of safe roads, clean water, and community members volunteering in food pantries across the country. 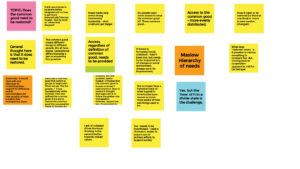 Some of the group responses on Jamboard.

The question “Does it need to be restored?” generated a number of expansive responses but most participants generally agreed that it does need to be restored. Shared values evolve over time and the common good often needs to be reevaluated. During the plenary discussion, this consensus provided a natural transition to the question of how do we get there. As one group put it, restoring the common good begins with civil discourse on different ideas, respect for others’ needs, and an acknowledgement that plurality of ideas is better than homogenous views.

The breakout rooms really added a new dynamic to the Alumni Hour discussion and encouraged more interaction between our diverse CHDS family. CHDS Strategic Communications Director Heather Issvoran wrapped up the meeting by thanking the panelists and attendees and reminded participants to register now for APEX 2021. The online session is scheduled for February 16-18 and the in-person session is scheduled for June 22-24. The next Alumni Hour discussion will be hosted on March 18, 2021.

Suggested Readings on the topic