Freed at First: A CHDS Visionary Makes His Mark 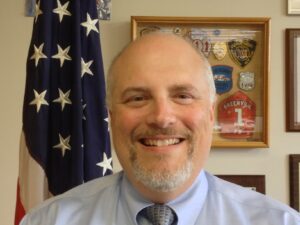 Center for Homeland Defense and Security (CHDS) master’s graduate Judd Freed (2011) likes to remind fellow practitioners, “Emergency management isn’t new. It started in 1755.” That was when the Great Earthquake of Lisbon struck to devastating effect, causing the King of Portugal to appoint the first official ever charged with superintending not only the national response but also the recovery effort. And, to underscore the authority invested in this appointment, the King gave his emergency manager the power to execute anyone who stood in his way.

As Judd puts it, in his signature, tongue-in-cheek delivery, “Some good ideas just don’t survive.”

While that form of execution remains beyond his purview, executing emergency plans stays right up his alley for this seasoned professional. Judson Freed’s role as Director, Emergency Management and Homeland Security for Ramsey County, MN, makes full use of wide-ranging scar tissue derived from early service as a firefighter, police officer, and university emergency coordinator.

The combination of broad experience and progressively more responsibility led him to CHDS based on a tip from another CHDS veteran, Kris Eide (Executive Leaders Program 2008), who was the emergency management director for Judd’s state. She also served as the second reader for his thesis, “No Failure of Imagination: Examining Foundational Flaws in America’s Homeland Security Enterprise.”

Double Honors in a Year of Firsts

Judd credits CHDS with sharpening his analytical skills and refreshing his inveterate love of teaching. In his words, “The biggest things I learned at CHDS were how to listen and think, in addition to how to research my thoughts.” 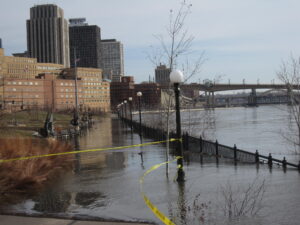 Flooding along the banks of the Mississippi River near downtown St. Paul.

How have these lessons paid off professionally? Judd was summoned to contribute to national panels and to serve as a subject matter expert, whether in Congressional testimony or as a vice chair of the National Association of Counties. Ultimately, in the midst of the 2020 pandemic, Judd also found himself ascending into prominence on the national stage, first as the new President of the International Association of Emergency Managers-USA (IAEM). What he did not foresee, however, was an invitation to harness his insight, front-line experience, and analytical penchant to a higher level with a policy-influencing appointment, another first and a career highlight.

The National Academies of Science, Engineering, and Medicine have just appointed Judd Freed to serve on the Roundtable on Risk and Resilience for Extreme Events. This two-year call to service gives Judd the opportunity to contribute materially to four targeted objectives, roughly summarized as:

Judd holds down a full-time job where he has worked 157 days straight without taking a day off, amid the cauldron of unrest in his part of Minnesota that weathered 1,900 arson fires within three days of protests in and around St. Paul. What made his world manageable in the aftermath of the George Floyd incident and throughout the pandemic? 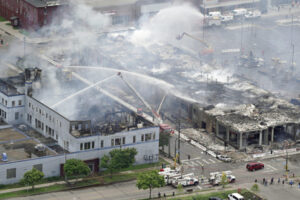 The aftermath of civil unrest in Minneapolis.

“The EMAP standardization process helped us have all our emergency management policies in place when COVID struck. We had already practiced record-keeping and all the things that allowed us, for example, to contend with triple the number of homeless residents without furloughing our employees because we went through our planning process,” he said.

In addition to championing the Emergency Management Accreditation Program, Judd decided to earn the Certified Emergency Manager credential eight years ago. Between CEM and EMAP credentialing, he and his department now demonstrate to county leadership and constituents that they possess objectively verifiable expertise to justify ongoing support. As he puts it, “I’m managing up all the time.”

To this end, education increasingly separates respected professionals from functionaries or dilettantes. Judd notes that having a baccalaureate instantly benefits his staff because they have to be able to write papers on short notice, a skill best cultivated through higher education.

“I don’t do incident command. I do incident management. We’re the ones who make policy recommendations. We have to figure that out,” according to Freed. As a result of the fine-tuning his policy paper skills underwent in the CHDS master’s program, he found his input not only appreciated but sought out in national forums. One CHDS professor, Nadav Morag, proved especially adroit in helping him focus his thesis topic selection, while professors Anders Strindberg and Dave Brannan served as invaluable sounding boards.

Another CHDS feature is that no one in the master’s class was fresh out of college. “All of your classmates had a clue,” he commented.

Judd Freed continues to contribute by teaching as an adjunct professor for Idaho State and, before the pandemic lockdown, lecturing at the University of Minnesota. Now, in assuming the new mantles of IAEM President and National Academies appointee, he aims to pay back the investment CHDS made in him.