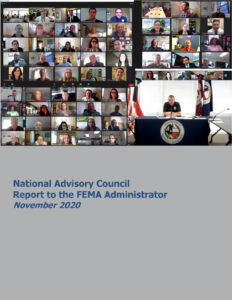 NAC Report to the FEMA Administrator

The Federal Emergency Management Agency’s (FEMA) National Advisory Council (NAC) recently presented a report to FEMA Administrator Peter Gaynor containing recommendations on key issues facing FEMA and the field of emergency management. The NAC advises the Administrator on all aspects of emergency management, including preparedness, protection, response, recovery, and mitigation for natural disasters, acts of terrorism, and other manmade disasters.

The composition of the NAC is a reflection of the Center for Homeland Defense and Security’s (CHDS) academic programs—representing a geographically diverse cross-section of officials, emergency managers, and emergency responders from state, local, tribal and territorial governments, the private sector and non-governmental organizations. So, perhaps unsurprisingly, CHDS has maintained a strong relationship with the NAC. But the overall collection of CHDS alumni acknowledged as contributing to the latest report is nonetheless impressive with 11 members on the council and three others named in the report. It should also be noted that Administrator Gaynor is an alumnus of the Executive Leaders Program (2013). Earlier this week, Gaynor became the Acting Secretary of Homeland Security after Chad Wolf announced his departure.

In recent years, the NAC has presented their recommendations in a memorandum format but this time it was delivered as a more thorough report format that provides more context, anticipated impact, and implementation considerations. This report is also unique because it represents a shift in reporting scope. In November of 2019, the National Advisory Council was charged with questions that would take a full year to answer instead of the traditional six months. Administrator Gaynor asked the NAC to address the following: 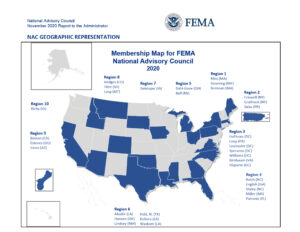 The report is also notable due to the sheer amount of issues confronting emergency management in the last year—from devastating wildfires in the west to a record-breaking Atlantic hurricane season, amidst the COVID-19 pandemic and civil unrest. Similar to CHDS alumni, many of the NAC members are on the front lines and leading the collective response to these difficult situations. “Despite not being able to have our usual in-person meetings, we were able to continue to work as a group to finish this report,” shared CHDS Executive Leaders Program alumna Linda Long, Battalion Chief at the Philadelphia Fire Department. “What I learned from the ELP program and from members of my cohort helped me to formulate my response to these important questions.”

The NAC consists of up to 35 members who serve three-year terms with approximately one-third expiring each year. Members are appointed by the FEMA Administrator as Representatives, Special Government Employees, or Ex Officio. The list below highlights CHDS alumni and faculty who contributed to the report as members of the NAC.