Calling All Hands on Deck to Harden a Soft Target 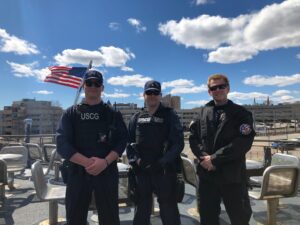 How does a Transportation Security Administration (TSA) executive already responsible for two regional airports also address the Achilles’ heel of securing ferries where any passenger can board with enough of an arsenal to create a bloodbath? The solution requires three vital components:

Steve, whose experience with going into harm’s way on purpose, includes mixed martial arts and Federal Air Marshal service, reasoned it this way, after an Amtrak captain responded to a what-if scenario. If his officers were to witness an active shooter attacking passengers on a commercial ferry, they would rush across the tracks, board, and do their utmost to take that shooter out. Under the circumstances, Steve figured it would behoove responders to increase their chances for a positive outcome. In Steve’s judgment, these responders should at least receive training that improves their capability and their odds. Thus, COBRA was born.

Over a dozen COBRA operations later, the U.S. Coast Guard and law enforcement agencies at all levels have warmed to the discoveries and recommendations in Steve’s 2018 thesis, “Safe Seas: Protecting America’s Ferries against Criminal Mass-Casualty Incidents.” 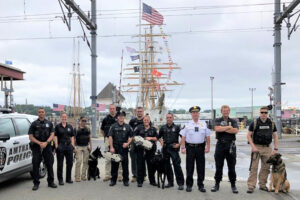 Blindbury at an active COBRA operation with partnering agencies (second from right).

Steve’s research highlighted that “only ferry systems have yet to establish a dedicated process for transporting firearms.” Moreover, for a variety of reasons, it is not feasible “to require that passengers secure their firearms in locked carrying cases while traveling on ferries.” Nevertheless, because soft targets and crowded places such as ferry systems pose attractive targets for mass-casualty attacks, something needed to be done to address this vulnerability.

Steve’s thesis laid the foundation for tackling this predicament on multiple fronts, including forging stronger interagency partnerships and bringing into the fold private sector collaborators with a vested interest in keeping their businesses viable and their customers alive. 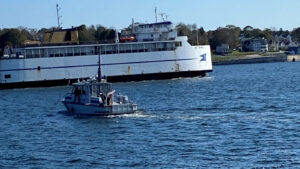 USCG boards a ferry during a COBRA exercise.

Steve brought non-traditional partners into the COBRA fold, including the company that owned the D-Day landing ship converted into a ferry, the black belts of a martial arts studio, and an aerospace firm. Steve convinced the Cross Sound Ferry Company, to lend him its biggest ferry for a weeklong, full-scale exercise that had responders boarding it and making shoot-don’t shoot decisions in real-time as they defended passengers and hunted adversaries. It was the black belts who acted as role players, adding an element of credible menace. Subsequently, a Collins Aerospace company observer came along to witness a similar kind of exercise at an international air terminal, on the theory that improving understanding of response challenges as a regional critical infrastructure steward would increase company ability to provide support where needed.

A COBRA with Legs

The COBRA program’s March success was the culmination of months of planning and agency outreach. On its heels came another COBRA exercise in June. This event deployed not only federal, state, and local agencies, including the US Coast Guard, but also what Steve called “four-legged officers” from Amtrak, Bridgeport PD, the Connecticut Department of Energy and Environmental Protection, and the Bridgeport Ferry canine team. Even a National Guard Civil Support Team joined in to exercise its deployment of radiological detection equipment. Altogether, this exercise drew on 14 agencies for simultaneous deployment across four ferry terminals from New York to Connecticut, two train stations, and four marine routes. 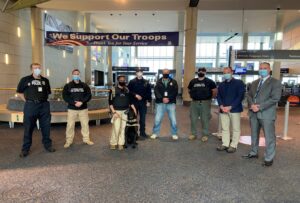 Blindbury at a signature COBRA exercise.

Another COBRA exercise in October switched gears, focusing on high visibility sweeps of public and sterile areas at the Bradley International Airport outside of Hartford, Connecticut.

With multiple successes has come recognition, both for Steve and his COBRA program. TSA recognized COBRA with its 2019 award, yet Steve takes equal pride in Connecticut’s Federal Executive Association recognition of COBRA with its Outstanding Law Enforcement Team Award.

What makes the biggest difference for Steve, however, is measurable progress toward fulfilling his core objectives of: (a) protecting critical infrastructure in line with DHS’s mission, (b) establishing a visible presence to deter potential attackers, and (c) fine-tuning response capabilities to handle emerging threats. To this end, Steve’s CHDS master’s degree has been a positive contribution that still pays dividends. It even inspired him to pursue a second master’s degree in transportation logistics management. Unsurprisingly, his next thesis will build on his CHDS and COBRA efforts, examining a national program for countering active shooters on ferries.