Q: Who would expect the Deputy Director of the Metropolitan DC Police Academy to advocate decriminalizing drug use and have her thesis cited repeatedly in an international study on future crime prevention?

A: Only the same CHDS instructors who recognized the 2017 work of Jessica Bress (now Jessica Tripoli) with the Outstanding Thesis Award.

Everything was unconventional about this thesis, “New High: A Future-Oriented Study of American Drug Policy.” Nevertheless, it gained purchase in the Journal of Frontiers in Bioengineering and Biotechnology in an October 2020 article edited by an authority at the Centers for Disease Control and reviewed by staff of the US Department of Health and Human Services. 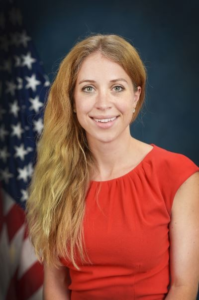 Jess, an NPS-CHDS master’s graduate (cohort 1601/1602) came upon her thesis topic on the heels of a master’s degree in public health from George Washington University, which left her conversant with quantitative and qualitative research design. Intrigued by Professor Nieto-Gómez’s research on embodied intelligence augmentation, she began to look at how present trends can influence the future, which brought her to her research theme.

To this end, the thesis advisor system, a cross between app-based speed dating and old school matchmaking, connected her with Rodrigo Nieto-Gómez. The latter festooned Jess with a dozen books and articles to inform her understanding of how to imagine probable futures grounded in sound analysis without steering her research in a foreordained direction. She read them all, and found her thesis advisor.

As her explorations confirmed, the undisputed assessment of current national drug policy was that it has consistently fallen short. Consequently, she had to examine contributing factors:

One of the impediments to the decriminalization approach, Jess found, is a knee-jerk tendency of observers to cast the issue in terms of an either-or debate. In her research, successful diversion programs that channel addicts out of prisons and into treatment must be lifelong. They need not automatically enable drug dealers to escape consequences. If anything, these equivalents of the fictional Breaking Bad antihero turned drug manufacturer face more focused attention from the criminal justice system. A system that is concentrating resources against drug dealers that would otherwise be diluted by attending to incarcerating low-level drug users better handled in a public health system. Consequently, the right kind of program offers little to incentivize drug kingpins to go from breaking bad to breaking worse.

Another epiphany was that drug production and distribution, may attract brilliant, sophisticated criminals adept at using complex technology and epitomizing the innovative impulse animating all entrepreneurs. As it happens, drug dealers turned out to be earlier adopters of pagers than their law enforcement counterparts. A similar early adopter tendency became evident in their embrace of Square technology to process contraband payments with a smartphone instead of cash.

Innovation only intensifies in the arena of nootropics and a recent tendency of technology workers to customize performance enhancement through micro-dosing. When a technology titan in Silicon Valley buys a synthesized psychotropic barely recognized let alone listed as a controlled substance, drug policy is in no position to keep pace. If the same individual adds billions in shareholder value, attributing enhanced creativity to micro-dosing this substance, criminal consequences are unlikely. The same applies to tailored doses optimized for athletic performance that deliver prodigies and profits yet remain difficult to trace. Meanwhile, today’s 3D printing technology already shows signs of being harnessed to personal drug production tomorrow.

Jess found her CHDS master’s more demanding yet more satisfying than her other master’s program. A Fire/EMS counterpart, Rafael Sa’adah, introduced her to the program. She now remains in touch with instructors, cohort members, and finds the alumni network second to none.

As Jess observes, “the future is not a linear extrapolation of the present. Black Swan events can change our reality.” Applying this discovery to her thesis and having her ideas percolate to the London-based Dawes Center for Future Crime bear testimony to the value of Jess’s thesis beyond an academic requirement for graduation.

To hear Jess discuss her thesis with fellow CHDS master’s graduate Bijan Karimi (cohort 1401/1402), check out this episode of The Reflecting Pool podcast.