Of Crowds and Crucibles: Learning On the Frontlines of Protest

Some could cite Gustave Le Bon’s seminal theory of crowd identity to claim that an individual induced by a crowd becomes less of a man. For Portland Fire & Rescue Battalion Chief Chris Barney (alumnus of the NPS-CHDS Master’s Program 2019), exposure to crowd and protest groups in Portland, Oregon, inspired a search for a deeper understanding of crowd group conflict. His 2019 thesis accordingly delved into other theories on crowd psychology and group identity.

In his view, protest crowds exemplify Social Identity Theory (SIT) in action. His Center for Homeland Defense and Security (CHDS) master’s thesis, “The ‘English Disease’ and Political Protest: How Social Identity Theory Can Enhance Public Safety at Crowd Events,” drew parallels from the kinds of violent crowd actions that erupt at some international soccer matches, such as those notoriously but by no means exclusively associated with English soccer fans. The thesis explored soccer hooliganism as a proxy for understanding how crowd groups form, cohere, and change in volatility. Barney used a comparative analysis, analyzing events in Portugal, Charlottesville, and Portland to understand where the Elaborated Social Identity Model (ESIM) can inform how crowd group identities change or adapt based on their perceived sense of legitimacy.

View from the Ground

As a member of Portland Fire & Rescue and a city resident, Chris has lived and worked with the protests all summer. As a regular member of the protest command post, he routinely witnesses the care and treatment rendered to both protesters and police officers by his agency’s Rapid Response Team medics during periods of intense emotion and aggression. Observing the protest activity both on and off-duty has provided the opportunity to recognize both the SIT in-group/out-group analytical markers and how ESIM explains changing group identities.

The desire for legitimacy within their expectation of a civil society helps define a protest crowd group’s identity. Chris sees evidence of this phenomenon in both his research and firsthand observations, which helps in understanding crowd behavior. In the days after the death of George Floyd, many different crowd groups coalesced in anger and frustration in Portland. After the initial shock and violence, the crowd groups dedicated to peacefully voicing their frustrations and desires for reform separated themselves from those groups more interested in mayhem. Initially facilitated through a liaison from Portland Police, these peaceful groups continued to exercise their protest rights in a non-violent manner, separately from their violent counterparts. This recognition and demonstration of legitimacy helped validate these peaceful voices and lessen the crowd management challenge.

When the situation on the ground changes, so do crowd compositions and objectives. Once federal law enforcement arrived to mount a more vigorous defense of federal facilities under nightly attack, this presence generated an opposing reaction by Portland groups that had been shying away from violence up to this point. The groups interpreted the federal response as illegitimate and altered many crowd group identities from non-violent to willing-to-confront-and-engage. As confrontations continued, community members who had not participated in the protests before joined the ranks standing across from the federal officers. Evidently, this situation fostered a crowd perception that violence could now be justified in terms of taking a stand against perceived illegitimacy.

Since the publication of his thesis last year, Chief Barney’s observation of Portland’s ongoing protest activity has spurred more insight on group identity and how to address those groups bent on destruction and mayhem. In these moments, public safety agencies must weigh civil liberties, local laws, citizen and responder safety, political influence, and public sentiment in finding a path to engage these particular protest groups. Such complicating factors demonstrate a need for additional research to navigate through the chaos of public unrest. Cynefin and other frameworks show promise, in the chief’s view, to illuminating the path forward through chaos and back to a civil society. 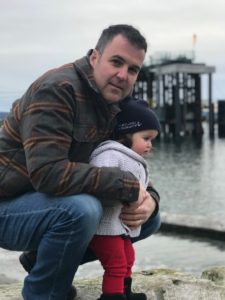 Chris Barney’s journey to CHDS took a while but was worth the wait. The Naval Postgraduate School (NPS) came across his radar when his best friend, attending the campus full-time as an Army Special Forces officer studying asymmetric warfare, told him he had spotted firefighters graduating with him. Inquiries within the fire service community unearthed the CHDS master’s program, but Chris wanted to improve his writing, which led him to complete an additional baccalaureate first. Eleven years later, he gained admission to CHDS but had to use his leave because departmental budget pressures meant his employer could not fund a replacement battalion chief to cover him during in-residence studies.

Chief Barney rates his CHDS master’s experience as invaluable. He found the level of instruction and opportunities for discussion unrivaled, sharpening his critical thinking in more strategic avenues and expanding his professional network. In many ways, it is a gift that keeps on giving, recalling this advice from The Meditations of Marcus Aurelius: Give thyself time to learn something new and good, and cease to be whirled around.

To hear Chris discuss his thesis research with fellow master’s classmate Octavio Saenz, Public Information Officer at the Texas Department of Transportation, check out this episode of Viewpoints in Homeland Defense and Security.