Rethinking Fire Danger: Where the Backwoods Meets the Backyard

Victor Hugo once observed that great blunders, like large ropes, are composed of a multitude of fibers. For Erik Litzenberg however, this observation applies equally to the kinds of challenge that exemplify a perfect storm this fire chief sees recurring repeatedly with devastating consequences. In particular, he noticed how fires at the point where urban sprawl meets fire-prone wildland expanse appear to be getting worse instead of better. 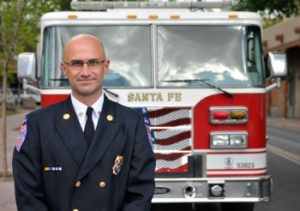 This trend inspired his exploration into the fire danger that has only recently commanded the kind of public scrutiny that arises when resulting catastrophe becomes intensely personal. Such has been the case with wildland fires of the kind that laid to waste the town of Paradise, California, in 2018, hence Erik’s thesis on what has come to epitomize the wildland-urban interface, or WUI. The thesis itself casts the trained lens of Litzenberg, Fire Chief, Santa Fe County, on the unique fire danger arising where home buyers succumb to the allure of nature by building closer and closer to fire-prone, natural habitats in their zeal to elude urban life’s concrete and congestion. Litzenberg is an alumnus of the Center for Homeland Defense and Security (CHDS) Master’s Degree Program (cohort 1805/1806) and Executive Leaders Program (cohort ELP1201).

Published in March 2020, “America Wildland-Urban Interface Burning: A Modern Application of a Historic Success,” Erik’s master’s thesis examines the problem through an analytical framework that senior soldiers use to analyze complex environments. Along the way, he draws out lessons from as far as Australia in the search for getting the upper hand on the WUI fire challenge.

An approach that runs counter to conventional wisdom, the Australian strategy of SDLE has found a place in the firefighting tool kit—if used in the right circumstances and after the homeowner has undertaken the right kinds of preparation. Erik’s Australian counterparts reporting on the utility of this approach found that home dwellers in remote areas are often reluctant to evacuate, especially if they must cross wide expanses of the bush where their escape route may well take them through paths that are already aflame. Consequently, over the course of hard-earned experience, Australians learned that there are indeed times when staying and defending the premises in a wildland environment becomes the better option.

In order for this kind of defense to avail, however, it is necessary for the resident defenders to have done advance homework. This means fuel reduction, which includes at least clearing the area surrounding the home of combustible material.

As for leaving early, because of the likelihood that a WUI situation may often compel the homeowner to choose between staying in place or facing certain roasting through a rapidly approaching wildfire, evacuation must take place much sooner in a WUI environment. By the time traditional evacuation orders come out, it is often too late for evacuation to be a first choice. Consequently, alert systems and homeowner awareness of the risk require greater sensitization and early warning for evacuation to be a realistic option.

If there is one indelible lesson that Chief Litzenberg’s research highlighted repeatedly, it is that the response to this particular fire danger must be a community-wide solution. Everybody has to do his or her part. This includes homeowners, responders, and officials responsible for landscape management.

Another realization was the outdated conception of there being a fire season. When it comes to where backwoods and backyards meet, it is better to think in terms of a fire year. There is no longer such a thing as a fire season. 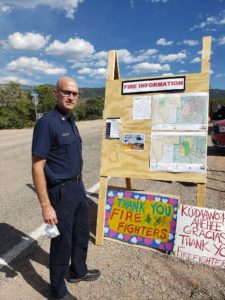 To the question of whether lessons gleaned from this study can automatically apply beyond the WUI fire challenge to other kinds of emergencies, the Chief advises caution. While he makes no claim to having the same experience with hurricanes, tsunamis, tornadoes, or other calamities that he has with fires, he suspects that it would be rash to advocate the Australian SDLE approach to just any situation. The reason is that many other types of emergency fall short of lending themselves to the kind of preparation necessary for making an SDLE strategy viable.

One possible area to explore more carefully for such an SDLE application could, in theory, be a situation involving an active shooter where the danger of evacuating into the line of fire roughly parallels that of leaving a remote home in the bush only to find one’s exit route unsurvivable. However, such an application would require careful study before earning the Chief’s support.

Overall, in summing up his work and his experience with the CHDS master’s program, Chief Erik Litzenberg highlighted his appreciation of how everyone has a part to play. This applies especially to his ultimate goal of creating fire-adapted communities, yet extends to improving community resilience against all dangers, whether natural hazards or induced catastrophes.