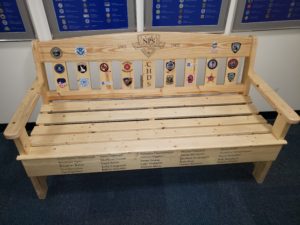 This custom bench honors the hard work and accomplishments of master’s cohort 1901/1902.

The Naval Postgraduate School (NPS) Summer Quarter Graduation Ceremony that was scheduled for September 25 was canceled due to the COVID-19 pandemic. The ceremony was set to include twenty-five homeland security professionals who completed a Master of Arts degree in Security Studies from the NPS Center for Homeland Defense and Security (CHDS), many of whom remain on the front lines of the national response to the pandemic. CHDS is sponsored by the U.S. Department of Homeland Security (DHS) National Preparedness Directorate, within the Federal Emergency Management Agency (FEMA).

Despite the lack of pomp and circumstance, the 1901/1902 cohort still took the time to acknowledge and celebrate their collective accomplishment. The CHDS master’s program transitioned to a virtual learning environment in February to mitigate potential exposure to the novel coronavirus. But the group was able to utilize technology that helped bring them together even though they were scattered across the country. Brent Travelbee, Emergency Management Section Chief at the Michigan Department of Corrections, described the connection, “For me, the CHDS course curriculum promoted interaction with all of our agencies at every level. Discussions from class content flowed over into conversations after class and identified best practices and challenges for each of our respective agencies. I was fortunate enough to be part of a cohort of amazing homeland security professionals that I now consider not only a professional network, but as family.”

FEMA Administrator Peter Gaynor, an alumnus of the CHDS Executive Leaders Program (ELP1201), surprised the cohort with a congratulatory message.

The twenty-five students participating in this master’s cohort represent a diverse cross-section of homeland security, with professionals from the fields of emergency management, education, law enforcement, fire service, homeland security, local government, military, and public health. The group also has a wide representation of agencies that collaborate across multiple levels to protect the Homefront: from the local level (Mesa Police Department, New York City Police Department, Portland Police Bureau, Prospect Heights Police Department, City of Troy Fire Department, New York City Fire Department, Prince George’s County Fire, North Central Fire Protection District, Maryland-National Capital Region Emergency Response System) to the state level (Michigan Department of Corrections, New Jersey Office of Homeland Security and Preparedness, Idaho State Police, Oregon State University) to the federal level (Department of Homeland Security, Federal Bureau of Investigation, Federal Emergency Management Agency, US Coast Guard, US Citizenship and Immigration Services, US Secret Service). Chris Adamczyk, Terrorism Liaison & Intelligence Officer, Mesa Police Department, added, “The part of CHDS I enjoyed the most was the one-on-one interactions with the instructors. Many of them have years of experience and it was truly an educational experience to sit and speak with them. I learned as much from my classmates as I did the instructors, hands down.”

Located at the Naval Postgraduate School, CHDS is the nation’s homeland security educator. During a rigorous 18-month program, master’s degree students develop skills in critical thinking, leadership, and policy. Each graduate completes a thesis on a current issue facing his or her jurisdiction. The theses topics from this cohort focus on key homeland security issues, such as critical infrastructure protection, cybersecurity, counterterrorism, disaster response, human trafficking, immigration safeguards, public safety, school security, and social/civil unrest. Many of the master’s theses have translated directly into policy and practice. The theses from master’s cohort 1901/1902 will be available on the Homeland Security Digital Library (HSDL) once they are fully approved for public consumption. Adamczyk, whose thesis focuses on Ideological Indicators of Identitarian Violence noted, “I applied for the CHDS master’s program because I want to play a larger role in homeland security strategy over the next decade. CHDS armed me with the proper information and pointed me in the right direction to accomplish this goal.”

The Naval Postgraduate School’s commencement ceremony video includes messages from distinguished leaders and honors the 292 military officers and DOD civilians who completed their studies this quarter.

In conjunction with their successful completion of the program, select CHDS students and faculty were honored with a variety of awards.

Outstanding Thesis Award: Christopher Adamczyk for his thesis Gods versus Titans: Ideological Indicators of Identitarian Violence and Katelin Wright for her thesis The Perfect Storm: Environmental-Induced Migration to the United States. The award is based on academic rigor and the quality of the literature review, analysis, and conclusions as well as writing and overall presentation of the thesis.

Curtis “Butch” Straub Award: Christopher Adamczyk. The award is presented in honor and memory of one of CHDS’ founders.

The list below displays the titles and agencies for each student in master’s cohort 1901/1902.