Editor’s note: This is the first of an ongoing series titled “Education in Action” where we profile CHDS theses and research projects that have evolved with time. Dennis Jensen wrote his thesis in 2006 and has since received regular grant funding for his initiative. This type of research is why the Center’s mission is so important. We are able to bring practitioners and academics together to solve some of homeland security’s most complex issues. This initiative is a model of practice for law enforcement.

Unfortunately, Dennis Jensen passed away in January 2020 at age 63, five years after his diagnosis with early-onset Alzheimer’s disease. He was a St. Paul, MN police officer for 24 years and was appointed Assistant Chief in 2004. After a heart attack forced him to step down from the police department, he pivoted to a civilian anti-terrorism post at the Ramsey County Sheriff’s Department. Jensen leaves behind a strong legacy and his thesis research continues to benefit the community that he served for so long.

Anyone who passes screening for the Center for Homeland Defense and Security (CHDS) Master’s Degree program enters the door with the capacity to produce a thesis. The ultimate goal is for master’s graduates’ theses to spawn programs that become a nationwide model. Welcome to the summit that Dennis Jensen (MA 0403/0404) reached with a thesis that changed the world of Somali-American citizens of St. Paul, Minnesota for the better.

Winning a state grant of $250,000 to launch his anti-jihad program, followed by a federal grant of $670,000 a few years later to build on program success, Jensen and his collaborators made the ultimate difference in a community mistrustful of authorities. And as Assistant Chief of the St. Paul Police Department at the time, Dennis epitomized the kind of top cop most immigrant communities feared. So did a subordinate member of his command staff, Tom Smith, who went on to become chief and continued working with Dennis on the larger program. By then, Dennis had retired from St. Paul PD, but the outreach program remained unfinished. Consequently, he became Director of Planning and Policy for the Ramsey County Sheriff, leading law enforcement and Somali community leaders in an enduring partnership that outlasted Jensen’s thesis, “Enhancing Homeland Security Efforts by Building Strong Relationships between the Muslim Community and Local Law Enforcement.”

The work extended into the tenure of his collaborator, Chief Smith, who testified before Congress and visited the White House as an exemplar on how to neutralize the forces of radicalization. At the time, perhaps the most sinister radicals were at large in the Twin Cities, actively recruiting young Somali-Americans into al-Shabaab as a prelude to slitting throats in Syria. The survivors could then return to the US as hardened shock troops to weaponize against other Americans. As Chief Smith tells it, Dennis developed his outreach program before law enforcement had any knowledge of the radicalization process that was already underway.

Informing this outreach were earlier lessons gleaned from witnessing the struggles of the sizable Hmong community that preceded Somali immigrants coming to Minnesota for their chance at the American dream. Adjusting to their new surroundings presented interlocking frustrations, including language and culture. Unsurprisingly, police inspired reflexive antipathy when authorities in the old country were notorious for terrifying average citizens through rape and amputation.

Before Jensen, benevolent intentions faltered. Few cops realized that a smile and a handshake would backfire when attempting to meet with leaders in a mosque. Instead, Dennis taught his colleagues to remove their shoes and keep their hands to themselves.

Finding a good interpreter was critical, as was the kind of sincerity that only works if genuine. This, Jensen epitomized, as Chief Smith recalls in the former’s oft-repeated motto: “You have to feed the bank of goodwill all day and every day.”

That bank continues to produce dividends, despite Dennis Jensen’s succumbing to a chronic struggle with medical ailments and passing away in early 2020.

Dennis recognized the subtle power of Somali women in their community. At first, women at meetings between police executives and community leaders would melt away into the background. Gradually, however, it became clear that the women were the parental force most opposed to radicalization. They did not want their sons joining al-Shabaab and heading off to Syria to chase the romance of jihad.

Engaging with this maternal force relied on women in the police force and even took convincing recreational staff to assign female lifeguards to public swimming pools favored by the Somali women, who would not go swimming if a male lifeguard were to enter the same pool.

A Special Edge: The Super Collaborator

A master collaborator, Dennis was renowned for helping many in the community and for supporting the promotion of women in law enforcement. His best collaborator, however, was not a cop but his finance director, Amelia Brown. 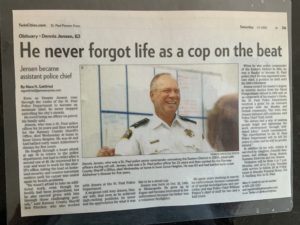 Also known as Amelia Brown Jensen, or Amy, she was completing her own thesis on strategic planning at the same time that Dennis was working on his CHDS graduate degree. Since Amy was not only Dennis’s spouse but also the departmental grant writer, she gave his thesis extra scrutiny. Little did Dennis realize that it was this scrutiny that inspired Amy to craft the capture strategy that won that first grant and, subsequently, the larger, federal grant.

Had Dennis lived to witness the 100-year anniversary celebration of the passing of women’s right to vote in the U.S., he might have seen it as a natural validation of one of his lasting principles: collaborating with every stakeholder in a shared purpose.

For Dennis Jensen and those who follow, the bank of goodwill remains open today, still paying dividends.