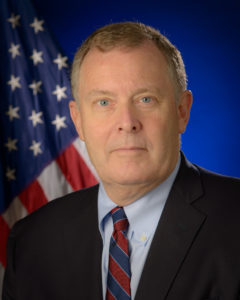 NASA Deputy Administrator Jim Morhard will tell you that success is not always a straight line from point A to point B. He’s achieved many great accomplishments throughout his personal and professional life but also faced many setbacks, from working in the Senate Committee on Appropriations to surviving a horrific plane crash that claimed the life of former Senator Ted Stevens and four others in remote terrain near Dillingham, Alaska.

On August 5, the Center for Homeland Defense and Security’s Executive Education Program (EEP) hosted Deputy Administrator Morhard for a discussion about learning from NASA’s past challenges and how homeland security professionals confronting complex public health, safety, and economic challenges can leverage that knowledge for future success. “Leadership Lessons from the Space Program: How Can These Inform the Unprecedented Challenges We Face Today?” was the most recent installment of the EEP Lecture and Webinar Series. This episode was hosted in partnership with the It was also the most popular so far, with over 500 participants attending the webinar via Zoom. Morhard was the featured guest and CHDS subject matter expert. Mike Walker moderated the discussion. Walker, a frequent lecturer in the CHDS classroom, is the Former Acting Secretary of the Army and Deputy Director of FEMA.

The EEP provides unique educational opportunities within the homeland security field. The demand for educational content in the homeland security realm has never been greater and challenges confronting leaders are changing so rapidly that CHDS instruction has evolved to reflect the current state of affairs. In light of the COVID-19 pandemic, the EEP is shifting gears to deliver topical content that is rapid, virtual, and even asynchronous. The EEP Lecture & Webinar Series was developed with these principles in mind. Focusing on the public health and safety, homeland security, and emergency management communities, the Lecture and Webinar Series has covered diverse topics ranging from “Strategic Planning for Reopening” to “The Battle to Regain Cyber Territory” to “Governmental Decision-Making During a Pandemic.” Participants are welcomed and encouraged to ask questions electronically during each webinar.

Mike Walker and Jim Morhard during the webinar

Morhard and Walker have worked together many times over their combined 60-plus years of professional service and both contributed to the establishment of CHDS during its infancy, so they have a unique perspective on the wicked problems confronting homeland security and public health today. They also know that the most difficult challenges can often yield the greatest solutions through collaboration, innovation, and a clear chain of command. If the COVID-19 pandemic is the biggest public health threat we’ve faced, then it is also the ultimate opportunity from which to learn.

Despite the current global pandemic, NASA has managed to push forward and accomplish historical achievements like putting American astronauts into space from the Kennedy Space Center for the first time in a decade and launching the new Mars Rover. How have they been able to overcome challenges to personnel and staffing? One particular key to success is maintaining a clear chain of command. To illustrate the benefits, Morhard discussed the differences he saw between the Navy’s clearly-defined chain and the US space program’s potentially-murky chain that he encountered upon arrival at NASA. “When I first started at the Navy in the Controller’s Office, there was a clear chain of command from the Secretary of the Navy and the Chief of Naval Operations all the way down to the line sailor,” he shared. NASA utilizes a matrix management structure to organize its many space centers, research and development corporations, mission directorates, and support directorates. So, he suddenly found himself surrounded by engineers and scientists with “unbelievable passion and skill” but the chain of command was not so clear.

NASA’s first confirmed case of COVID-19 was at Ames Research Center in Moffett Field, CA. They anticipated the virus would affect staffing and planned for it. “It was easy to close centers and headquarters, but the hard part was figuring out how to reopen operations,” said Morhard. Morhard authored a return-to-site program to identify activities that were critical to mission success. The number one priority was the health and safety of NASA employees. The clear and transparent plan placed an emphasis on taking care of people first. “You’ve got to care about people before they even think about believing in you. People are the most important asset of the mission. By engaging across multiple levels of command, you provide a clear pathway for collaboration,” said Morhard. Walker shared an example of the benefits of collaboration in the context of empowering employees. While participating in a classified Space Shuttle launch mission, alongside the launch director, they detected a glitch in the downrange test. “The downrange test director urged them to postpone the launch because he was unable to guarantee the operation would succeed,” Walker said. “And despite a quickly closing window to launch, the director agreed to perform one more downrange test. The test was successful and the glitch was corrected, but it was very encouraging to see that every member of the team had the power to stop a launch.”

Jim Morhard appears before the Senate Committee on Commerce, Science, and Transportation as the nominee for Deputy Administrator of NASA on Thursday, Aug. 23, 2018. (photo courtesy of NASA/Bill Ingalls)

Another facet of collaboration is diversity in the workplace. “Diversity helps create new solutions and throughout the years, NASA has been a leader in diversity,” said Morhard. “We’re not looking at age or color, we’re looking for talent. What can you bring to the table? As we put these teams together, the more diversity we have, the easier it is to find solutions to the collective challenges we face.” Diversity also comes in the form of competition. NASA wants the competition in private industry to succeed because it creates a beneficial cycle. “The public-private partnership between NASA and SpaceX that recently got our two Astronauts up and safely back from space drives down cost and breeds innovation. If you look at the space economy that’s developing in low Earth orbit, it will be successful due to such partnerships,” Morhard said. “We expect our research and development capabilities to increase dramatically. Low Earth orbit offers a new environment to experiment with microgravity. Some of those microgravity projects include the production of retinal implants and efforts on immunizations that couldn’t be done otherwise.”

While NASA is trending towards a more agile approach, they’re still focused on integrating lessons from past failures. It’s a familiar situation for homeland security professionals who face wicked complex problems that have many dynamic components. As an example, the Mars Perseverance mission is looking for signs of ancient life and collecting rock and soil samples for a possible return to Earth. NASA has successfully identified a location to explore that may contain ancient microbial life. But they didn’t know how to search for potential fossils on Mars, so they studied the fossil location data from Earth to better inform the Perseverance mission. As expected, it hasn’t been a straight line to success—so it’s important to remain resilient. “As an example, we’ve successfully landed on the Moon four times already. We could have created three very expensive craters while trying to learn how to effectively penetrate Mars’ atmosphere, but we figured it out.” Morhard knows a thing or two about resiliency—and he read dozens of books on the topic while recovering from the near-fatal injuries he sustained in the plane crash in 2010. Drawing a parallel to the CHDS mission, Morhard offered advice for CHDS students working hard on their Master’s thesis or in other CHDS programs. “I have so much respect for the people working in homeland security and public health, and I know we will get through these tough times together. The work you’re doing is incredibly important. We must remain resilient and continue searching for answers. For me, NASA embodies the human spirit of exploration and that’s why we’re here together.”