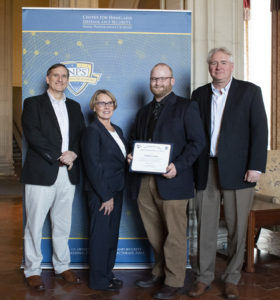 Hiring within the federal government is often a long and tedious process; the remoteness of the location only exacerbates the challenge. Requirements to travel long distances for formal interviews or background investigation protocols all but eliminate potential applicants within these areas from pursuing such efforts. Along the northern border with Canada, Center for Homeland Defense and Security (CHDS) Emergence Program alum Joshua Conroy (cohort 1902), serving as a Customs and Border Protection (CBP) Officer and Collateral Duty Recruiter in Jackman, Maine, knows all too well the difficulties in hiring and retaining qualified candidates and the impact of simply being understaffed by even the smallest of margins. Upon acceptance into the Emergence program, Conroy seized the opportunity to address the challenges he faced in northwestern Maine.

He commented, “Our hiring timeline is simply too long…nine to 18 months places a significant burden on existing officers and the remoteness of Jackman makes retention an on-going struggle.” His approach, and one he honed during his tenure in the Emergence 1902 cohort, was to focus on simplifying the processes for recruiting and hiring northwest Maine residents. Conroy remarked, “New officers rarely arrive in remote locations such as Jackman without at least an eye on transferring at some point in the near future…if we can create an environment more supportive of hiring qualified individuals familiar and comfortable in the area, we can greatly reduce turnover.” In discussing the hiring process, similar to all federal law enforcement organizations, Conroy focused on two key elements within the CBP process: the oral boards and polygraph requirements. “In most cases, a local Jackman resident needs to drive to our Boston [Massachusetts] office for the oral board and Plattsburg [New York] for the polygraph…most times of the year that is over 10 hours of driving,” Conroy stated. For qualified applicants, those currently working fulltime, such trips require a significant investment in time off from their current employment and potentially challenging discussions with their current employers. Developing an alternative became the focus of Conroy’s Emergence change initiative project.

Working closely with his Port Director, Tim Lacasse, Conroy began the process of constructing a framework for shifting some of the hiring steps from a centralized and hierarchical methodology to allow for greater inputs at local offices. Forwarded through his chain of command, to include the Recruiter in Charge for CBP in Boston, Brian Levitre, Conroy focused on those items within CBP’s organizational control; specifically, the oral boards. By simply shifting their location from Boston to Jackman (in Conroy’s instance), one of the earliest steps in the hiring process is greatly streamlined and allows for improved recruitment of qualified, local candidates with an increased opportunity for long-term retention. The critical nature of recruitment and retention in the remote areas of Maine was widely recognized by state political leaders and Conroy’s project drew the interest of U.S. Senator Susan Collins (R), U.S. Senator Angus King (I), and U.S. Representatives Chellie Pingree (D) and Jared Golden (D). “Briefing state congressional leaders in March 2020 was an outstanding opportunity to discuss state-wide challenges with those capable of promoting the greater organizational change required to truly make a difference,” Conroy remarked. 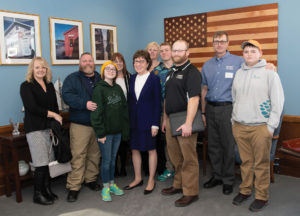 As a six-year veteran of CBP, Conroy found Emergence through an organizational email highlighting the program. He noted, “I was intrigued by Emergence starting with the application. He continued, “Most education programs offered to us as government employees fail to demand much from the applicant…the Emergence application made me believe the program was simply different.” The differences between Emergence and other programs became more apparent on day one. Conroy reflected, “I remember sitting in class on the first day in amazement…everyone was so exceptionally smart and gifted…you can’t help but wonder if you are the weak link in the cohort.” Beyond his fellow cohort members, he also found the course design of mixing six months of online work with in-residences exceptionally supportive of learning. “The two, one-week in-residences were really effective in giving us time to explore the material without being under a firehouse and also allowed us to bond as a cohort over the six months of the program,” Conroy stated.

The totality of the Emergence experience Conroy viewed as truly unique. “There are so few places, if any other than CHDS, where the quality of individuals and diversity in backgrounds and experiences can come together to discuss critical issues in homeland security,” Conroy stated. He continued, “The networking opportunities have continued well past the completion of the program…we routinely come together to work through issues facing all of us and with COVID-19, we are even more reliant now on the collective knowledge of the cohort.”