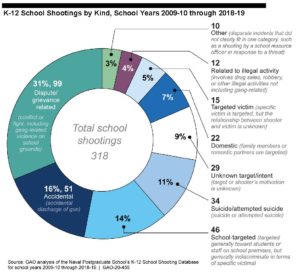 School shootings by Type (from the GAO report)

The K-12 School Shooting Database (K-12 SSDB) is an interactive and live database that compiles all incidents in which a gun is brandished, fired, or a bullet hits school property for any reason, regardless of the number of victims, time, day of the week, or reason. It was originally developed during the Homeland Security Advanced Thinking Program (HSx) to answer the question: how often does a gun go off in school? “There was a lack of centralized, unbiased data on school shooting incidents. We created the K-12 School Shooting Database to address the void of data, and to share that data with other people and organizations that are researching the issue,” said database co-founder Riedman, a criminologist at the University of Hawai’i at Manoa. The associated data is based on open-source information and third-party reporting and is available to the public for viewing or downloading. Through the inclusion of criteria that is cross-referenced, unfiltered, and agnostic, users can conduct a more detailed analysis of incidents within their area of interest to make better informed decisions and generate more accurate reports. Users can filter between subsets within the data and drill-down to the specific criteria they need (e.g., cause, number of victims, pre-planning, type of weapon used, demographics, or location). “The data collected is only valuable if it can reach law enforcement leaders, school administrators, policymakers, and researchers who can use it to make informed decisions about school safety,” explained CHDS Director Glen Woodbury. An accompanying report on the research and methodology used to develop the K-12 SSDB explains that the definition of what constitutes a school shooting is often nebulous and may result in the exclusion of unique incidents.

The GAO is an independent, nonpartisan agency that provides Congress with reports and information that can be used to improve government and work more efficiently. The report on Characteristics of School Shootings was requested by Education and Labor Committee Chairman Bobby Scott (D-VA 3rd District) and Judiciary Committee Chairman Jerrold Nadler (D-NY 10th District) and is the first government-mandated collection of data on school shootings. Since there isn’t an established national definition of what constitutes a school shooting, the GAO had to create its own. That’s why the K-12 SSDB was the perfect source of data. The report introduction notes how they defined school schoolings, “We primarily relied on the K-12 School Shooting Database because we determined it to be the most widely inclusive database of K-12 school shootings (i.e., compiling every instance a gun is brandished, is fired, or a bullet hits school property for any reason, regardless of the number of victims, time of day, or day of week), and therefore most appropriate for our purpose. We included on our list, all shootings that met our criteria regardless of the shooter’s intent (e.g., accidents and suicides).” 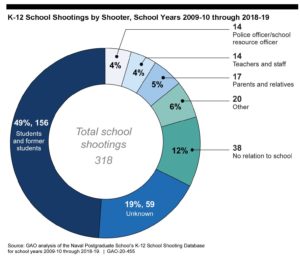 Focusing on data for school years 2009-10 through 2018-19, the GAO report found that shootings at K-12 schools most frequently resulted from disputes or grievances between students or staff, although the specific characteristics of school shootings over the past 10 years varied widely. After disputes and grievances, accidental shootings were most common, followed closely by school-targeted shootings, such as those in Parkland, FL and Santa Fe, TX. The characteristics of schools where shootings occurred also varied by poverty level and racial composition. Urban, poorer, and high minority schools had more shootings overall, with more characterized as a dispute or grievance. Whereas suburban, wealthier, and low minority schools had more suicides and school-targeted shootings, which had the highest fatalities per incident.

The report also included a literature review to identify empirical research from 2009 to 2019 that examined discipline approaches in school, and the effects of said approaches on outcomes of school gun violence, school violence, or school safety. It ultimately concluded that various factors contribute to the lack of research examining this particular link between school discipline and school shootings, making it difficult to isolate the effect of any one factor, including school disciplinary measures. 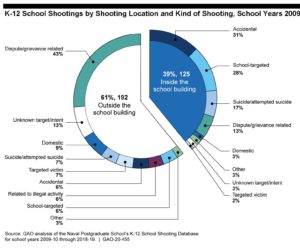 The link between school discipline and school shootings became a point of focus in 2018 when the newly-formed Federal Commission on School Safety issued a report that suggested federal guidelines on school discipline made schools less safe. The federal guidelines addressed in the report were established in 2014 to reduce the disproportionate number of suspensions and other disciplinary measures affecting students of color. Studies show students of color are more often suspended or given harsher discipline than their white counterparts, so the guidance promoted alternatives to suspension and expulsion and opened investigations into school districts that had severely racially skewed numbers.

Now there’s momentum behind the push to create a standard definition of school shootings following the GAO report. If passed, the bill H.R.4301: School Shooting Safety and Preparedness Act, will create a federal definition for “school shooting” that is very similar to the definition first created by Riedman and O’Neill to frame the data collection of the K-12 SSDB. The bill will also establish an annual report on indicators of school crime as it pertains to school shootings.