There was a time when collaborations in academic research were glacially slow. After all, the titans of psychoanalysis Sigmund Freud, Carl Jung, and Alfred Adler, first had to earn a doctorate, publish widely, and only then enter gingerly into one another’s orbit through discussion groups. By this standard, Center for Homeland Defense and Security (CHDS) master’s students Matthew Hackner (1805/1806) and Katelyn Mason (1801/1802) would still be awaiting a proper introduction. 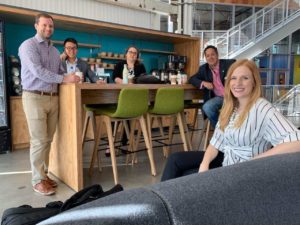 Mason, in foreground, during a research trip with a group for a DHS exchange project.

Instead, they managed to exchange ideas on cyber and misinformation threats to the homeland, implementing changes in how federal intelligence analysis dovetails with that of state and local counterparts. This process took months, not years. And it began showing dividends before either had completed their master’s thesis.

How did the two intelligence analysts, one federal, the other regional, find one another? They utilized several components of the CHDS network, from word-of-mouth recommendations to guided connections by CHDS Strategic Communications Director Heather Issvoran to their eventual introductions via the Alumni Forum.

As it happens, both individuals pursued the master’s program to develop precisely the kind of collaborative synergy they now epitomize. In Hackner’s case, it was a matter of avoiding a career plateau by enhancing his skills. Being a cyber threat intelligence analyst with the DHS Office of Intelligence and Analysis exposed him to several colleagues who spoke highly of the CHDS master’s program. However, many preferred the National Capital version of the program, whereas Hackner set his sights on Monterey. He had two reasons. First, one of his goals was to meet more state and local colleagues outside of the Washington Beltway. Second, it was deeply satisfying to return to Monterey where, as a young Air Force intelligence neophyte, he had originally studied at the Defense Language Institute some 21 years ago.

In Mason’s case, the draw came from direct contact with another colleague and master’s program graduate, Samantha Korta (1605/1606). Mason is the Lead Intelligence Analyst at Northern California Regional Intelligence Center.  It was during the CHDS Fusion Center Leader’s Program training that Sam ignited Katie’s interest in expanding her skills as a fusion center intelligence analyst by tackling the master’s program.

In short, before encountering each other or future classmates, both knew that they were signing up for more than a diploma. 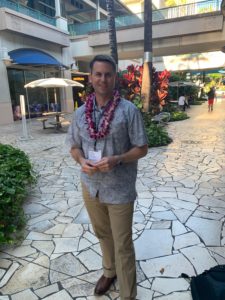 Hackner en route to present at a corporate security symposium in Hawaii.

Frustrated by lackluster response to certain aspects of the cyber threat, Hackner traveled throughout the country, delivering cyber threat briefings and looking for opportunities to improve receptivity to this subject. His first research paper for CHDS informed his office’s preparations for implementing cyber defenses for the 2018 midterm election. Nevertheless, something was missing on the front lines, and it took input from Mason as well as CHDS public health experts Alana Tornello (master’s cohort 1805/1806) and Courtney Mayard (Emergence 1901) to help craft a game plan that would make information sharing more valued by its intended consumers. Tornello works at the Office of Emergency Preparedness & Response for New York City Department of Health & Mental Hygiene and Mayard is the Disaster Program Manager for Medical City Plano, Texas.

As Mason noted, “a key challenge is to deliver timely information that is useful, relevant, and easily accessible to law enforcement, public safety, and private sector partners. Even though the fusion center can handle classified materials, most of its customers lack ready access to the kind of facilities that can store or handle classified material.” Hackner could hardly agree more. In his view, ease of access sets apart a program that makes a difference from one doomed to oblivion.

Hackner is currently developing a portal within the Homeland Security Information Network aimed at constantly engaging users and giving them a mechanism for pointing DHS analysts like him at what state and local cyber and information security partners need to see. He calls this a bi-directional sharing approach. In addition to looping in regional fusion centers like Mason’s, this portal will incorporate additional content from the National Guard, which is running a similar operation in parallel. Look for the portal to go live circa September 30, if not sooner.

As Hackner observes, “when it comes to cybersecurity, you’ve either been hacked, or you haven’t been hacked. It’s pretty binary, but a new challenge is emerging in the form of information integrity that puts at risk the veracity of messages state and local officials communicate with the general public.” Consequently, when receiving readily accessible insight into cyber and information security threats as informed by stakeholders’ perspective, homeland security partners show high receptivity. Similarly, when the means is there to expose foreign sources of misinformation, which has become Mason’s special focus, the more compelling the evidence, the less difficult it becomes to encourage caution and countermeasures.

Independently of each other, both Matthew Hackner and Katelyn Mason decided to go to extra lengths to each produce an unrestricted thesis. Their ongoing commitment to increasing the speed of synergy appears to hinge on access to information, and both are doing their part.