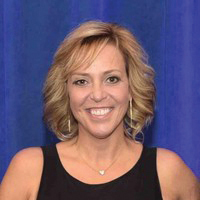 Last month, Center for Homeland Defense and Security (CHDS) master’s degree alumna, Cathy Lanier, was featured on the National Football League’s (NFL) show NFL 360. The episode focuses on impacts by women on the game of football and the NFL—where Lanier serves as the Chief Security Officer. Her job is crucial to maintaining security for players, spectators, and events. The show also talks about contributions by groundbreaking female broadcasters, coaches, and players. As the first female to achieve the rank of Chief Security Officer, her story is highlighted as an example of the contributions women have made (and continue making) to the game of football. But what is most interesting is the unique path she took to get here.

The NFL 360 episode delves into Lanier’s turbulent childhood and subsequent teenage years. Lanier married at age 14 and had to drop out of school when she became pregnant shortly after. But the birth of her son created a new resolve in her. From that point on, Lanier would dedicate herself to providing the best possible life for her son. Intrigued by an ad in the Washington Post that mentioned the incentive of tuition reimbursement, Lanier applied to the DC Metropolitan Police Department (MPD) in 1990. The help with tuition would allow her to continue her college education while working multiple jobs. When she joined the Department, it was not always easy to be one of the few females in a male-dominated profession. “When I started in 1990, it was a very different environment,” Lanier shared. “You couldn’t assign two women to a patrol car, they had to be paired with a male officer. It’s always been a male-dominated job, and that’s just how it was back then. In DC, female officers weren’t allowed to ride along in marked patrol cars until 1972. So, within my lifetime we’ve seen some remarkable changes that allowed me to get where I am today.” Over the years, Lanier experienced varying degrees of inappropriate treatment—including sexual harassment by a supervisor—even after being promoted to Sergeant. But there were also many bright spots during her time in the Department. She formed great friendships and had the chance to perform a wide range of rewarding police work during her tenure with MPD. “I came here to be a police officer. From being dispatched to crimes in progress to helping my fellow DC residents, that’s what I loved about it and I didn’t want to get pigeon-holed into what they considered traditional female roles.” After moving up the ranks to Lieutenant and patrol supervisor, in 1999 Lanier became a Captain and, later that year, was promoted to Inspector and selected to lead the Department’s Major Narcotics Branch/Gang Crime Unit. In August 2000, she was promoted to Commander of the Fourth District of the city. With a renewed focus on homeland security, Lanier attended CHDS in 2004 (0401/0402). “At the time, I was Commander of the Special Operations Division and recently established the department’s first Homeland Security/Counter-Terrorism Branch,” she said. Lanier wrote her thesis on “Preventing Terror Attacks in the Homeland: A New Mission for State and Local Police.” 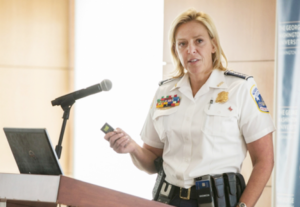 Bolstered by her experience at CHDS, Lanier became the first female Police Chief of Washington, DC, in 2007. “I think my master’s degree from CHDS played a part (in getting the Chief job). I think education is very important and whenever they are looking for a high-profile public official, your resume has to matter. So when there was speculation about who the new DC mayor was going to nominate for the Chief of Police, I felt like I had the qualifications thanks in part to my education—which also includes a master’s degree in management from Johns Hopkins University.” She oversaw many changes to the department during her time on the force, and worked hard to implement innovative practices while in charge. During that time, she led several high-profile events in the nation’s capital (including the largest Presidential inauguration ceremony). As the Chief of Police, there is always tremendous pressure to perform. But as a female in this role, there is added pressure, “Once you are given an opportunity that people didn’t think you could do, it kind of gives you more motivation to prove you belong and show that they made the right decision. Knowing that there are eyes on you and there’s a chance to be an example for other women gives you momentum. That momentum is a sense of responsibility and it helps you get through the tough times and challenges. I have to get this right because if I don’t, I’m letting a lot of other women down.”

As the NFL’s Chief Security Officer, Lanier needs to synthesize information from many different sources to pull off an event as popular and complex as the Super Bowl. Having come up through the ranks of MPD and attended CHDS, Lanier has performed a wide range of security functions and that give her a more wholistic view of what it takes to collaborate on security operations. “Coming from DC, there are roughly 36 federal law enforcement agencies in the region, so I was already used to that multi-federal IC (intelligence community) component but when I got to CHDS, it somewhat changed that way of thinking,” Lanier reflected. “When you’re in a small cohort with classmates from the FBI and the Coast Guard and FDNY, you’re very close and it really promotes sharing information about different types of policies or procedures. We’re not just in class debating issues—we’re spending time together learning about what other agencies are doing to combat similar problems, and ultimately collaborate on common solutions…that could impact national security together. It changes the dynamic and level of respect you have for each other and our collective mission.” 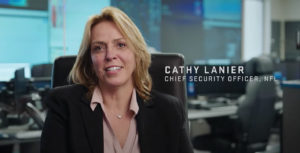 Lanier talks about the multi-agency collaboration required to secure the Super Bowl venue.

Speaking of her former CHDS classmates, one of them recently joined Chief Lanier at the NFL. GB Jones recently moved from the FBI to become the NFL’s Director of International Security Services. “When I heard about the potential opportunity to work with Chief Lanier, I jumped at the chance. We were classmates together in cohort 0401/0402, and at the time we were both doing a lot of work with special event management and special event security. I always found her to be very operationally focused, and she had a knack for translating good ideas into better operations.” 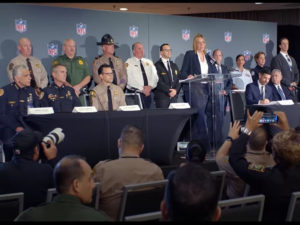 Lanier noted how GB’s diverse background will benefit the NFL’s security operations, “GB is a good fit for us not only because of the international aspect, but also for his knowledge about the counter-Unmanned Aerial Systems (UAS) mission. GB has a background in emerging technology—he has a pilot’s license and is a drone operator, so he understands how those technologies could be leveraged against us.” She described a situation in 2017 when a drone flew over Levi’s Stadium in Santa Clara, CA and dropped leaflets into the seating area. Then a few hours later, the same guy attempted to do it over a game at Oakland Coliseum but after coordinating with local authorities, the police were waiting for him. In this case, it was just paper but it allowed the NFL to establish measures to mitigate the chance of it happening again—potentially with something worse than marketing pamphlets. “As the world has changed, special events security has gotten more complex,” Jones added. “Cathy’s assignments have allowed her to stay engaged with those changes at a huge number of large-scale, important special events, where she has been out front carving out best practices. My professional assignments took me away from national-level special events management for a time, but I continued to stay abreast of changes to the landscape while doing some impactful things with crisis management planning, mass casualty incident response, and aviation security (particularly drone and counter-drone operations). I’m very pleased to be able to put that experience to good use helping Cathy move forward on some specific initiatives she wants to accomplish on behalf of the NFL.”