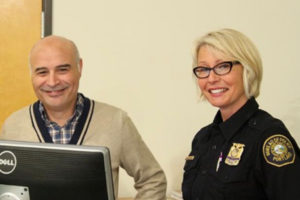 “What do many immigrant and refugee communities have in common? They fear cops and don’t trust the government,” according to Natasha Haunsperger, a front-line officer with the Portland Police Bureau (PPB) in Oregon. With several years of intelligence unit experience, Natasha found this attitude unsurprising. She should know.

Growing up in her native Croatia, she witnessed armed police abusing authority at checkpoints during the civil war of the 1990s. Any excuse to humiliate average citizens on a bus between Serbia and Croatia became a personal challenge to authority figures eager to flaunt their power. Indeed, the younger version of Natasha arriving in Portland at the turn of the century harbored identical misgivings. A career in law enforcement could hardly be more unimaginable for this immigrant, whose early studies foreshadowed a career as an art curator. Something changed.

Haunsperger’s case manager job in a Portland domestic violence shelter introduced her to assigned police officers who did not fit the bully stereotype. They were downright helpful, ultimately inspiring her to take the police exam in Oregon. Now, 14 years later, she has become the cop that Muslims and other wary communities are inclined to trust. For Natasha, who favors lasting impact over token initiatives, the progress has been painfully gradual. Then came two more changes.

Serving on a protective detail with a visiting US Secret Service agent assigned to cover a high-profile Portland appearance of a former president, she learned about the CHDS master’s degree program. After the agent sent her the application link, Natasha applied for the program. Now, as a member of Cohort 1901/1902, she resolves to bring the CHDS mindset to her own agency.

Nadav Morag’s course on comparative government supplied the necessary catalysis. Nadav’s requirement for a policy memorandum gave Natasha the inspiration to uncover and adapt successful strategies from another country to this predicament. Specifically, her deep dive into approaches of the British Home Office and of the London Metropolitan Police (aka Scotland Yard) delivered smart practices about ways to expand engagement with communities reflexively distrustful of authority.

As Nadav points out, his course assignment has two aims: raise awareness about alternative approaches in the broader homeland security sphere and sharpen the skill of assessing a policy in another context.

A Swing and a Hit

Taking Nadav’s lessons to heart, Natasha produced “Policy Memorandum on Comprehensive Community Engagement with the Portland Muslim and Arab Communities as a Domestic and National Security Strategy: The United Kingdom Comparative Case Study.” After being reviewed in class, the memo found its way through the chain of command to the police chief, who approved moving forward with the idea.

In the immediate aftermath of 9/11, outreach programs proliferated across the country with mixed results. For the most part, as Natasha’s research has shown, their focus was rooting out nascent terrorists to thwart another terrorist attack. As a result, this narrow focus gained more intermittent progress than lasting traction. Over time, communities working with police in terrorism cases surfaced other concerns, including how poor integration into the mainstream of American working life could lead disillusioned youth to succumb to gang recruitment and criminal activities in the absence of career prospects. Sometimes, this kind of concern remained unexpressed or unheeded. Now, this is changing.

Haunsperger at a community outreach event for the Muslim Advisory Council.

The promise of the British model suggests that relationship-building is a long-term undertaking with most Muslim communities. Community engagement structures adapted from the British model can take the form of neighborhood groups formed at the police station level, where local community leaders come to know police officers personally and actively participate in civic advocacy aimed at mitigating safety problems on a communal level.

A critical next step is developing an institutionally adopted strategic plan in concert with Muslim community leaders who have already demonstrated a willingness to engage with PPB.

As for Natasha herself, she would like to capture what works in a manual that others can build upon in this area. Being in it for the long haul, she wants to build a solid foundation that will continue to improve over time.