Anatomy of a Collaboration: DHS Across the Maple Line

“They walk among us,” Kristin Wyckoff said, during her joint presentation with Colin Murray at the annual Center for Homeland Defense and Security (CHDS) Alumni Professional Exchange –Continuing Education Workshop (APEX) conference last February. Conference attendees smiled with her as she illustrated the collaborative relationship between American and Canadian colleagues while testing audience ability to tell which of today’s popular Hollywood actors are Canadian. (It was a trick question; they ALL were.) 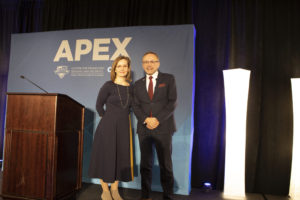 Kristen Wyckoff and Colin Murray at the 2020 APEX Conference.

As a Department of Homeland Security Science and Technology (DHS S&T) representative in Ottawa, Kristin (MA1401/1402) constitutes the American half of a strategic partnership between DHS S&T and its Canadian counterpart, Defence Research and Development Canada. Colin (ELP1802) represents the Canadian half of the partnership. Each works and lives in the other nation’s capital under an arrangement similar to what career clandestine service officer Henry Crumpton described as a tradition that the CIA and FBI implemented for exchanging senior officers to “boost understanding and cooperation between the two entities.” In his memoir, The Art of Intelligence, Crumpton revealed the entities informally refer to this practice as “an exchange of hostages.”

As an inveterate fan of education with degrees including international relations and management information systems, Wyckoff was fully credentialed for a series of roles with progressive responsibilities within DHS. At a colleague’s behest, she applied for the CHDS master’s program.

The 50 books that arrived on her doorstep on the heels of her acceptance convinced her she had chosen wisely in complementing her existing master’s degree with the CHDS diploma. Kristin notes, “CHDS caused me to step back from day-to-day matters and take a more global view. It ultimately prepared me for my current job.”

She was already a seasoned director when it came to the unique intersection of technology and collaboration focused on the exigencies of enhancing public safety and security. As a career of building national-level programs led her to take the helm of DHS S&T’s Office of Public-Private Partnerships. Thus, events combined to drive her to the next logical step of expanding to the international front. 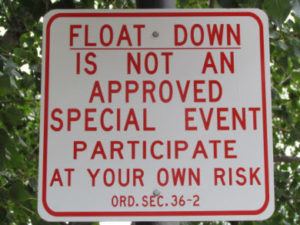 A warning sign from the Port Huron Float Down

Following her graduation from NPS, another colleague happened to mention how DHS was developing a new position in Ottawa. Then she happened to meet Colin, who had already crossed the border to find himself embedded in DHS as its first Canadian exchange officer. She applied for the new position, won it, and has now crossed the border herself in the opposite direction, with family and dog in tow. As a result, no week goes by without Kristin and Colin sharing information and working collaboratively to explore joint approaches to enhance public safety and security. Consider these concerns they share.

On the Micro Level: Float Down

No concentration of planning or warning can thwart the kind of mentality that sanctifies a booze party with home-made rafts on the water during summer. When that water is the Saint Clair, between Port Huron, Michigan, and Point Edward, Ontario, the free-for-all known as Float Down doubles as a rescue drill for the Coast Guards of both the US and Canada. 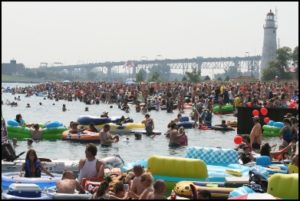 The Float Down presents many issues for emergency response.

Despite the US Coast Guard’s repeated efforts to shut down the reckless revelry, after 40 years, Float Down has developed a devil-may-care, enter-at-your-own-risk cachet that tries responder patience year after year. (Revelers document their warnings proudly at http://porthuronfloatdown.com/)

Thanks to the efforts of Kristin and crew, Canadian and American responders were able to demonstrate a cost-effective, cross-border capability for real-time, shared situational awareness. As a result, responders were able to retrieve wayward rafters and water-logged partiers oblivious of drowning risk and of which side of the border they had graced in their stupor.

Arguably the most significant contributions escape general notice. This is the fertile ground of science and technology collaboration where Kristin and Colin make their mark. Because budgets in both countries are tight, it avails to approach technological challenges with a cohesiveness that works this way: When there is a need for an investment in the first responder domain, either a Canadian or an American S&T team can assume the lead. Then it shares the benefit with the other country’s counterparts. What no longer happens, within this community, are teams duplicating programs, only to find that each has spent the same money on the same objective.

By instituting collaborative defaults like this, Kristin and Colin save their respective organizations substantial budget outlays while concurrently benefiting from each other’s targeted investments, expertise, and networks to address shared challenges. Indeed, this collaboration has produced the kind of return to demonstrate that this hostage exchange pays for itself. Ultimately, as Kristin points out, “…this arrangement is about fully leveraging expertise and innovation within each country so we can quickly identify and transition solutions that contribute to the safety and security of our communities.”