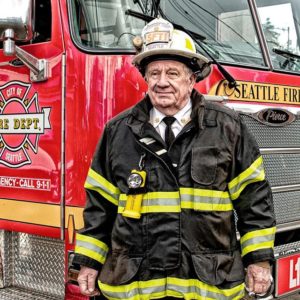 When the fire alarm sounds in Seattle, there’s a pretty good chance it will be answered by Center for Homeland Defense and Security (CHDS) alumni. The Seattle Fire Department counts over a dozen CHDS alumni among the ranks. As one would expect, most of the requests for assistance come from regional emergencies. But one particularly entertaining request came all the way from California. As the Strategic Communications Director at CHDS, Heather Issvoran has a large network of contacts in the emergency response field. But when the lint filter on her clothes dryer caught fire spontaneously, she called one specific person to ask for help: Seattle Fire Assistant Chief, Alan “A.D.” Vickery. Partially because he was alphabetically the first contact in her phone from the fire service—but also because she knew she could depend on Assistant Chief Vickery to answer the call and provide assistance. “A.D. answered the call in a very professional manner, but he will never let me live that one down,” Issvoran joked.

After 53 years on the job, Vickery decided it was time to take a break. “After 10 Fire Chiefs and 12 Mayors, it’s time to step back because I have confidence in what’s happening now.” So, the city of Seattle hosted a retirement ceremony to honor his accomplishments and legacy with the department. There were over a thousand people in attendance and Vickery described the ceremony as humbling. During the ceremony, he spoke about the many changes he’s seen over the years. The development of new firefighting responsibilities, techniques, and tools has paralleled his career path—and the changes from then to now are dramatic. Seattle Mayor Jenny Durkin summarized the ceremony and Vickery’s wonderful career, “It is rare when you have a chance to honor someone who has done so much for a community.”

Jay Hagen, CHDS Master’s Program alumnus & Chief of Bellevue Fire Department, was one of the speakers at Vickery’s retirement ceremony.

Vickery entered the Seattle Fire department in 1966 and was the longest-serving firefighter at the department. In 2016, Vickery was honored by the city of Seattle for 50 years of dedicated service. At that ceremony, he was given a special gift from former Mayor Ed Murray as Thursday, August 4, 2016 was proclaimed “A.D. Vickery Day” in Seattle. “I’ve never had a bad day in this department. I never had a day when I didn’t want to come to work. That’s an incredible job to have and it’s due to the people I work with,” Vickery shared.

Prior to his assignment as Assistant Chief, Vickery held numerous positions within the department, including the first Deputy Chief of Special Operations and then Assistant Chief of Operations. Prior to that, he was as a firefighter/paramedic, Captain of the Fire Investigation Unit and served on both ladder and engine companies. “If I had been a priest and fireboat captain, I would’ve performed darn near every job in the department,” he joked. Vickery is nationally recognized for his proactive role in preparing firefighters and first responders to safely perform their jobs through modern technology and techniques, and is a founding member of the Interagency Board for Emergency Preparedness and Response (IAB). 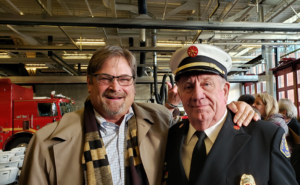 Vickery completed the Executive Leaders Program in 2006 (cohort 0601) and immediately implemented the lessons he learned from the experience. The program was so rewarding that he also became an excellent ambassador for CHDS. Vickery successfully recruited a handful of fellow firefighters to enroll in CHDS programs. He’s part of the reason why CHDS has such a strong relationship with Seattle Fire. “A.D. has an eye for talent and filled our programs with current and emerging leaders from Seattle Fire,” added Issvoran. At his retirement ceremony, Vickery was honored by former Chief Claude Harris, current Chief Harold Scoggins, and Mayor Jenny Durkin.

In parting, Vickery said compassionately, “This department is incredible and it isn’t about me. The legacy is about the men and women of this department, and what they do for this community.”