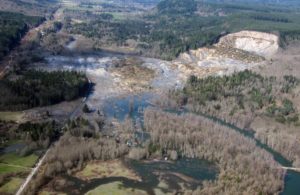 Aerial photo of the Oso mudslide courtesy of USGS.

The rugged landscape of Snohomish County, WA is a testament to the powerful forces of nature. From the steep banks of Puget Sound in the west to the frozen austere Glacier Peak volcano in the east, it is a place that can play host to a diverse range of natural disasters. Severe weather and seasonal flooding are the most common hazards, while earthquakes pose the greatest threat to public safety. But it was a March 2014 mudslide near the small community of Oso that brought worldwide attention.

The mudslide, often called the SR530 disaster, claimed 43 lives—the greatest loss of life to such a hazard in U.S. history. It reshaped a mile-wide swath of the Stillaguamish River Valley. It also transformed the Snohomish County Department of Emergency Management, fundamentally changing the way it helps the community prepare for and respond to disasters. 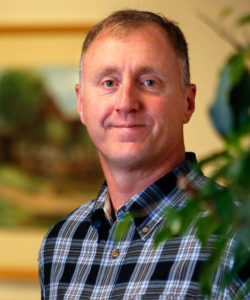 Jason Biermann was among the handful of Center for Homeland Defense and Security (CHDS) alumni who were tasked with responding to the SR530 disaster. Biermann is the Snohomish County Department of Emergency Management (DEM) Director and he knows first-hand what a disaster looks like. He has been a firefighter in Texas, an emergency manager in Wyoming, a soldier in the U.S Army and Army Reserve, and did his CHDS master’s thesis on the collective response to SR530. Biermann added, “At the time, I was a program manager focused on disaster recovery and hazard mitigation. But I’ve been a firefighter in a large city (Austin, TX) and spent almost 29 years in the military (Army & Army Reserve) where I started as infantryman then became a medic when I came off active duty. I eventually worked my way up to Senior Enlisted Advisor to the Commander of the 654th Regional Support Group. I also deployed to Afghanistan shortly after the war started.” His thesis, titled “Emergence of Organizational Fit: Applying Configuration Theory to the Snohomish County (WA) Emergency Operations Center” focused on emergency operations center (EOC) organization with the SR530 disaster as the case study. Based on his thesis recommendations, the Snohomish County DEM updated their EOC doctrine and training to focus on situational factors and flexible configurations. “They took those lessons and incorporated them, completely changing the way our Emergency Coordination Center runs. We used to use a fairly straightforward ICS (incident command structure) but then realized we needed to empower certain positions, allowing them to do ad-hoc thinking and problem solving by design. They’re unencumbered from the standard processes.”

Biermann attributes his time at CHDS as being a major influence on the way he approaches his job. He has fond memories of his time in the master’s program. “Very early in my time here, instructor Chris Bellavita made an impact on my mode of thinking when I responded to a seemingly basic question. He asked if I was from Seattle and I responded, ‘No, I’m from Everett.’ Right then he challenged me to be as definitive about other things in life. That was literally the first in-residence and it has stuck with me until now.”

Another element from CHDS that Biermann utilizes frequently is the Strategic Planning course (NS4755) taught by instructors Rodrigo Nieto-Gomez and Nicholas Dew because it exposed him to different business models and varying perceptions, leading to some of the innovative changes Snohomish County DEM has adopted. “It really sparked my interest in organizational management, change, and structure,” he said. It also provided insight on how to rally other people around change and gain consensus for the new process. “A vast majority of people who feel like ICS is the only way forward. And, it’s difficult to get buy-in from these folks.”

In addition to the naturally-occurring disasters facing Snohomish County, there are also plenty of human-driven threats to homeland security. “We recently opened a commercial airport and Boeing is there manufacturing planes so we have concerns about industrial espionage. We have had and continue to have a flow of hazardous materials through the area, too,” Biermann said.

Biermann’s department was asked to coordinate the county’s response to the opioid epidemic. In general, Snohomish County only contains about 10% of the state’s population but in recent years, it has accounted for up to 18% of the opioid deaths statewide. “People mostly know about our community due to the Oso mudslide, but for each of the last several years we’ve had double the number of opioid deaths than we did during that disaster,” Biermann said. An estimated 70,000 people died in the U.S. in 2017 due to opioids. “Imagine if a hurricane or natural disaster or terrorist attack resulted in 70,000 deaths,” Biermann said. “And it’s something we’re a part of, leading the response, using the ECC and the processes that were adapted to fit our group. It’s worked well—most of the partnering agencies would say they brought structure to the overall epidemic process.” The multi-agency group focused work around seven broad goals then identified granular objectives. Working collaboratively, participants have identified 153 different objectives to accomplish in the fight against the opioid epidemic. 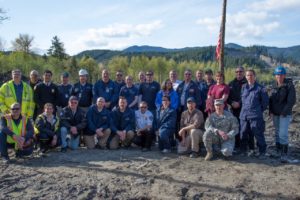 Of course, Biermann is not working alone. His agency coordinates this work, but they’re supported by a number of jurisdiction and agency partners including those led by CHDS master’s alumni Dave DeMarco (Everett Fire Chief), John DeRousse (Everett Police Captain), Tom Davis (Lynnwood Police Chief), and ELP alumna Laurel Nelson (Deputy Director of Seattle Office of Emergency Management), among others. “We are a community that can say: over the course of the time since November 2017 until now, collaboratively as a multi-agency group, we have successfully accomplished 106 of the 153 different objectives we initially identified” to fight the opioid epidemic, Biermann added. That accomplishment is a definitive statement, just like Bellavita encouraged during his first in-residence session. Sharing regular reports, including specific data and details about the work being accomplished by agencies, provides critical context about the mission.

“I’ve had this conversation with lots of folks—everyone from congressional folks through GAO (Government Accountability Office) and local and state folks,” Biermann said. “We have the National Incident Management System (NIMS) to respond to crises, and this is a crisis. I’ve asked: why doesn’t everyone do it this way?”

Back in 2009 when the H1N1 flu pandemic was looming, many emergency management organizations were standing up operations centers and readying for the flu pandemic that was supposed to be on its way. The opioid epidemic has prompted a different response. Historically, drug addiction has been viewed as a personal problem, the result of individual choices.

“A lot of our work has been destigmatizing it,” Biermann said. The data is clear. “This is not just affecting addicts who live under the overpass, there’s a large portion of people using it in their homes. So, it’s not isolated to a specific segment of the population—it’s everybody who is being impacted. Consequently, this puts a strain on emergency medical services, law enforcement, infrastructure, public health, etc.”

The overarching theme here is derived from his time at CHDS: learning to look at things in novel ways. “We have doctrine and we have things that guide us, but we allow for the proverbial thinking outside the box, and sometimes that’s just understanding what the box looks like. If you can first define the box, you’ll have a better chance of fixing the problem.”

If the list of people working the opioid epidemic in Snohomish County reads like a directory for local governments, that’s by design. “I don’t know who else is doing it this way—although I know there are some…because on a recent spot on NPR, one of our partners stated that we were the only ones doing it this way, and we got feedback pretty quickly from other agencies saying that they’re doing it, too (Montgomery County in Ohio, for example),” Biermann said.

The Pacific Northwest is an interconnected place, and it makes sense to encourage collaboration to tackle a community-wide problem. But it is more than just a novel approach because it’s truly working.