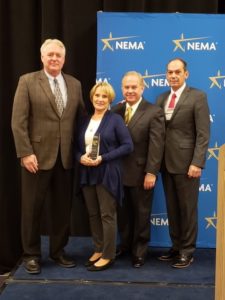 The National Emergency Management Association (NEMA) announced that Ellen Gordon, Center for Homeland Defense and Security (CHDS) Associate Director of Executive Education Programs, is the recipient of the 2019 Lacy E. Suiter Distinguished Service Award. It is a testament to her incredible career in emergency management and homeland security. The prestigious award is given annually to an individual who has contributed greatly to the emergency management profession and it is named in honor of Lacy E. Suiter, one of the nation’s most experienced and respected emergency management and homeland security leaders and one of the CHDS founders.

The award was presented to Ellen at NEMA’s 2019 Annual Forum on October 28 and although she was surprised to receive the award, it was no coincidence that Glen Woodbury and Stan McKinney were on hand to present the award. CHDS has always had a strong connection with NEMA. Headquartered in Lexington, Kentucky, NEMA is the association of professionals dedicated to enhancing public safety by improving the nation’s ability to prepare for, respond to, and recover from all emergencies, disasters, and threats to our security. Woodbury, the CHDS Director, has served as NEMA President and received the Lacy Suiter Award in 2017. McKinney, the Director of CHDS Executive Education Programs, has also served as NEMA President and received the Lacy Suiter Award in 2018. In fact, since the inception of the award in 2006, nearly all of the award recipients are associated with CHDS in one way or another. NEMA President Brad Richy, who is also a CHDS Executive Leaders Program alumnus, serves as Director of Emergency Management at the Idaho Office of Emergency Management, hosted the Annual Forum.

For Ellen, the award has a very special meaning because she worked directly with Lacy Suiter, the award’s namesake. “I am extremely honored to be a recipient of the Lacy Suiter Award. I always held a high regard for Lacy and all he did for emergency management and for CHDS. To be presented the award by Glen and Stan, both recipients of the award, was a double honor!” she remarked. 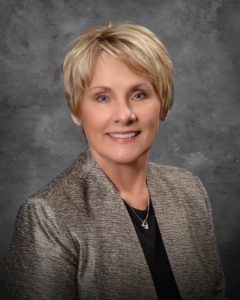 In 2003, Ellen was part of the inaugural cohort of CHDS Master’s Degree students and was presented with the Curtis H. “Butch” Straub Award for exemplary academic achievement and leadership among her peers. “Ellen has always exemplified the professionalism and commitment to excellence that the Lacy Suiter Award represents,” Director Woodbury noted. “Lacy would have been proud to see Ellen honored.” Inspired by her experience within CHDS, Ellen helped create the Executive Leaders Program in 2006, where she serves as the program manager and lead facilitator and has educated over 1,000 senior-level executives and managers. She also helped develop programs specifically for the Radiological Emergency Preparedness community and the recently established Emergence Program.

CHDS master’s graduate Tom Balint, FEMA Associate Chief Counsel for Resilience, summed it up by saying, “When I first began my career in emergency management, I was blessed to get to know and be mentored by Lacy Suiter who impacted my thinking and ultimately my career path. The National Emergency Management Association annually awards a distinguished service award in his name and memory. On the stage today were Glen Woodbury and Stan McKinney, two recipients of this prestigious award, presenting this year’s award to Ellen Gordon. I feel blessed to have called each of these recipients mentors, teachers, and friends.” 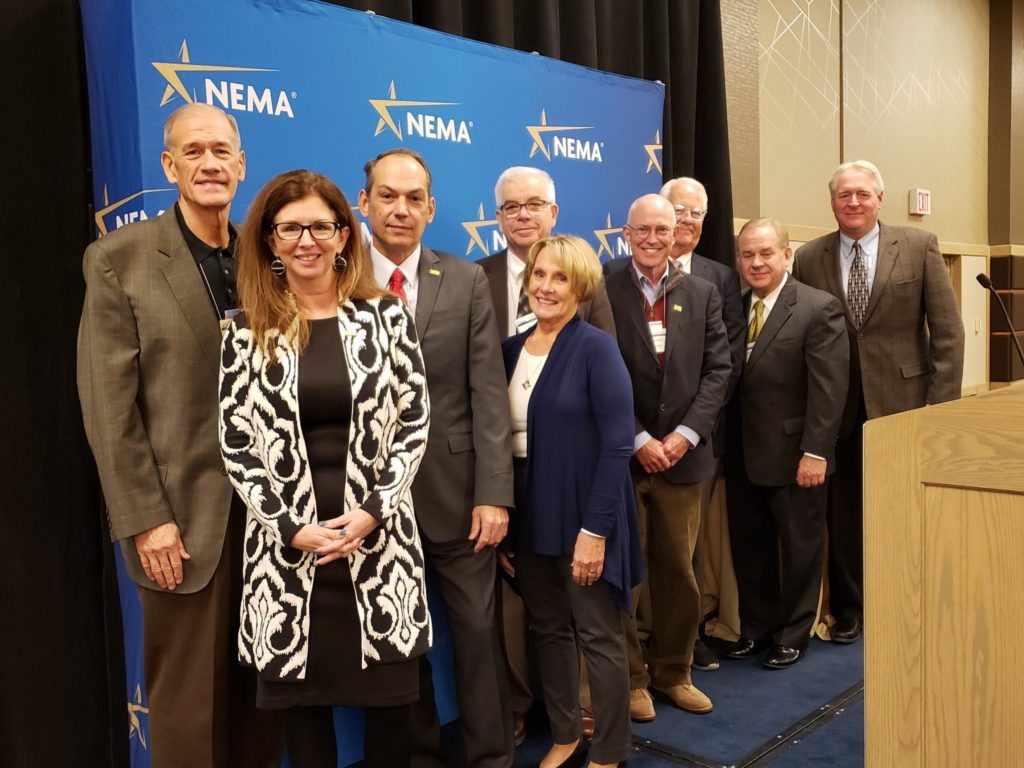