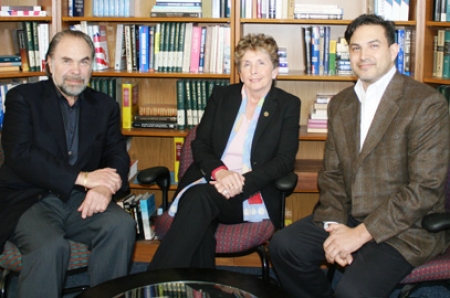 Failure is not an option. It’s a necessity.

“We continually introduce different kinds of perspectives to push students to think critically on different levels at all times to help them become stronger leaders and ensure their learning apertures are wide open,” said CHDS faculty member Dr. Kathleen Kiernan. “We’re bringing the best from across the country into the homeland security enterprise to introduce the convergence of best practices in both the public and private sectors.”

During their four-hour session Teller and Sen discussed the correlation of risk and innovation and the importance of learning from shortcomings.

“Failure is a part of success,” Teller said during a subsequent interview. “I tell my A&R (artist and repertoire) people you’re expected to fail. I’d rather you fail at the edges. Be spectacular in your failures. Don’t fail in a common way.”

A Harvard Business School graduate, Teller gained insight into problem solving while adapting to technological changes as the industry shifted from vinyl records to compact discs to the digital age. At the same time, he was navigating a sometimes fickle industry in which he worked with varied acts from the Rolling Stones to Bruce Springsteen, the 80’s band Fine Young Cannibals to country crooner Wynona.

“With my artist and repertoire people I tell them ‘you are expected to fail,’” Teller said. “You are expected to occasionally sign an artist that doesn’t connect. But, I would rather you fail at the edges of where music is going rather than failing with something derivative of what is possible right now. Be spectacular in your failures. Don’t fail in an ordinary, common kind of way.”

For Sen, missteps should be controlled and purposeful, as well as being mission-guided. For start-up companies so often resource-constrained and facing hurdles, a culture that nurtures acceptance of letdowns is critical to survival.

“There is always some risk, but if you try to remove risk you cannot innovate,” Sen noted.  “Innovation requires that sense of urgency.  The current opinion of startup experts is that you want to fail often and fail frequently, and fail small so you can quickly learn and adapt and continue moving forward.”

Innovation also requires sound decision-making in a fast-moving and uncertain environment. During his class presentation Teller challenged students to engage in what he calls “Whole Brain Thinking,” a concept he finds necessary to finding solutions to complex matters. Too often, he said, leaders try to manage problems by viewing them flatly through their comfort-lens or, worse, “pressing your nose harder and harder into the wall” without varying one’s point of view.

“If people conscientiously try changing their perspective as they look at a specific problem I think they would find a path to the solution comes a lot easier. And, maybe, the solution becomes more robust, more interesting and, ultimately, a lot more effective.”

Clearly, change and risk take on different meanings in the public sector that is inherently risk-averse than in the private sector, as both men acknowledged. But they likened the intensity and motivation of entrepreneurs to the mind-set of the CHDS student composition, who excel in their profession and are driven to seek higher education within their already demanding schedules.

“They are the kind of people who are similar to founders and entrepreneurs,” Sen observed. “They are folks who see something about the world and they want to really have a positive impact. My talk was really about how these folks that are in government can bring a lot of the ideas from the commercial sector about how to create innovative change.”

Teller agreed: “Change in those organizations has an additional degree of difficulty than change in the private sector. If one individual takes a larger perspective in terms of problem-solving approaches and finds a kindred soul, and they in turn find another kindred soul, over time you can change an institutional attitude and implement changes that would be important and productive. That is a process that takes time to evolve.”