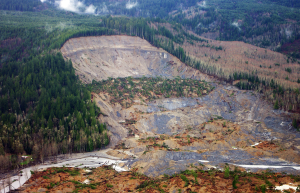 This photograph shows the upper part of the Oso Mudslide that occurred in northwest Washington on March 22, 2014.
Photo courtesy of Jonathan Godt, USGS

The iconic mountainous landscapes carved by ice sheets centuries ago gives the Pacific Northwest its breathtaking beauty, and sometimes its peril.

That was grimly evident March 22 as relentless rains coupled with geography triggered what some observers called a “wall of mud” slamming through the rural town of Oso, Washington, and into the North Fork of the Stillaguamish River. The slide killed at least 42, caused flooding, closed a state highway and left a barren swath of earthen devastation.

Known popularly as the Oso mudslide, the disaster synthesized all the challenges of emergency management as homes were buried, search and rescue teams descended and multiple agencies strategized in a remote hamlet of Snohomish County.

Leaders who are alumni and current students of Center for Homeland Defense and Security programs were at the forefront in responding to what has been called the most destructive event in the state since Mount St. Helens erupted in 1980.

“I was absolutely shocked at the size and how far it had traveled across the valley floor,” said Major General Bret Daugherty, the Adjutant General of the Washington Military Department and a student in the CHDS Executive Leaders Program (ELP). “The trees were all laying down in the same direction. It was total devastation. There was no sign of the small community that had been there. It was a huge churn of mud and logs.”

“The most immediate task for our department was situational awareness,” said Snohomish County Emergency Management Department Director John Pennington, the point man for the disaster’s response and an ELP alumnus. Initial media reports on the day of the slide, a Saturday, did not reflect the magnitude of the event and intelligence on the ground was spotty with 911 calls initially conveying a slide and maybe one house damaged.

In fact, the slide left a barren swath of mountain with 75-feet deep mud and debris stretching about 1½ miles wide. Local community responders were almost immediately on the scene but overwhelmed with search and rescue operations for victims. This hampered their ability to communicate the severity of the incident, and helicopters normally assigned for overhead visual inspection were occupied with rescues.

“As awareness unfolded in such a diminished manner we were effectively flying blind,” Pennington said. “Those same helicopters we would normally use for video feeds to our Emergency Operations Center (EOC) were instead rescuing people from the debris fields in any way they could.”

The county and state EOCs were up and running almost immediately on Saturday and the concerns were growing rapidly. Not only were people unaccounted for, but there was impending flooding upstream of the slide and potential catastrophic flooding downstream, and the debris pile itself was shifting and unstable.

“There was still a clear potential for substantial devastation and mass loss of life if the debris pile had broken apart and catapulted downstream,” Pennington said. “Our fear was this would happen as dusk was settling in and residents would not have a daylight visual on the situation. The death toll could have easily been four times as large had the debris broken out and gone downstream at the initial projected velocity.” 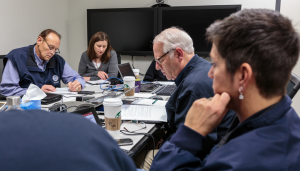 As state and local operations ramped up, FEMA Region 10 Administrator and ELP alumnus Ken Murphy began mobilizing an Incident Assistance Management team and alerting FEMA search and rescue teams. About one-third of its staff began preparing equipment, analyzing data on the affected zone and readying food and water supply trucks should they have been needed. FEMA would later activate its search and rescue team as well as 60 teams of cadaver dogs and guides. He further worked with state officials to garner a Presidential Disaster Declaration, which frees federal moneys to support response.

With the search underway, a confluence of other challenges was brewing. The small town of Darrington had been cut off because flooding made State Route 530 impassable. A temporary gravel road was constructed that enabled access to the town and allowed search teams and equipment to traverse the slide from east to west.

Snohomish County Sheriff’s Office Captain Tom Davis, a current CHDS master’s degree student, was the field commander on the slide’s west side during the first week of response. “My primary responsibilities for the first week included logistical oversight of our landing zone operations, Helicopter Rescue Team operations and addressing the ubiquitous number of logistics issues between the field and the Incident Command Post,” Davis said. “From so many perspectives, this was uncharted territory for many of our Sheriff’s Office personnel and having an overall framework to operate within was essential.”

During those early days of the response current CHDS master’s degree student Jason Biermann, Deputy Director with the Snohomish County Department of Emergency Management, was deployed to Darrington as a liaison supporting first responders in the debris field as well as coordinating volunteers, community donations and helping facilitate community informational meetings.

“Initially, the biggest priority in Darrington was re-establishing communications,” Biermann said. “This is a community where many of the residents rely on landlines. The slide cut the fiber-optic cable that provided the landline, including 911, and most Internet service. In addition, immediately after the slide there was only one working cellular provider.”

The second week of the response found Biermann overseeing activities in the county Emergency Operations Center (EOC) and Davis serving as the Sheriff’s Department liaison officer there. Over the course of the incident, there were 117 different agencies represented in the EOC and more than 200 organizations participated in the search and recovery efforts.

ELP participant Christy Grant, FEMA Individual Assistance Branch Chief, was deployed to the state EOC the Monday following the slide. Her primary responsibility was to assist with a needs assessment for the affected area. Grant enlisted the varied government and non-government agencies in the area to identify needs such as sheltering, housing and re-employment as well as legal and counseling services. Her FEMA role was to be a trusted advisor and guide to synthesizing community resources, Grant said.

“My focus was how I could support all these entities to integrate and best leverage their resources,” Grant said. “We provided technical assistance on the structure of a Human Services multi-agency task force that is now led by Snohomish County.”

Grant is crafting a proposal, with ELP alumni Libby Turner, which could potentially provide a national needs-based approach playbook to help identify the most effective way to support communities during response and recovery efforts. The guide is focused on needs assessment, resource identification and gap analysis.

“Our ultimate goal is to develop a standardized tool from which to inform stakeholders and support a holistic and synchronized decision making process,” Grant said.

Grant worked closely with CHDS master’s degree graduate Sheryl Jardine, Mitigation and Recovery Section Manager with the Washington Emergency Management Agency. Part of Jardine’s job was heading a damage assessment in between rotating stints as the Disaster Manager. Information from the assessment was used to secure the Presidential Disaster Declaration, requested by Governor Jay Inslee.

“Christy (Grant) was instrumental in giving us pointers on writing the request in the best way possible to convey the level of impact on this community,” Jardine observed.

Once the Presidential Declaration was approved, Jardine’s task was coordinating the funding for infrastructure repairs and individual assistance. She also worked with Biermann to get information from the scene to the state EOC.

“It really helps when you know people,” she said. “Pre-existing relationships are the foundation for effective coordination in emergency response.”

A unique aspect of the disaster and the response was that it affected three Native American Indian Tribes – the Stillaguamish Tribe of Indians, Sauk-Suiattle Indian Tribe and Tulalip Tribes.

CHDS master’s degree graduate Wendy Stevens, FEMA Region 10 Tribal Relations Specialist and the initial Tribal Liaison for the disaster, coordinated tribal participation in the response, especially in the trusted relationships necessary to perform the valuable nation-to-nation exchange of brokering emerging situational awareness from the Tribes. Stevens set up the first-ever Tribal Desk station in the region, which was approved only days prior to the incident.

“Within 24 hours of the actual incident of the Oso mudslides I had worked with our tribal partners who provided real time and transparent access to disaster information, as well as confirmed and reported current situational awareness and incident reports,” Stevens noted.

The affected tribes successfully delivered situational awareness reports within 48 hours, which Stevens was able to forward in consistent succession in real time to FEMA’s state partners.

“The tribal leaders, tribal officials, and tribal community volunteers did an outstanding job openly transferring impact reports, shared information, and direct response support to the disaster, alongside our State and local partners.”

As the emergency management adage goes, every disaster is different. Most, though, provide enduring lessons learned that will be relevant in subsequent events.

For example, Pennington said the response changes his perception of the interface between incident management teams (IMTs) and Emergency Operations Centers (EOCs) in the earliest stages of response. Decision-makers generally assign those two entities equal weight in gauging awareness and as response unfolds.

“This experience took the traditionally accepted view of those two entities (EOCs and IMTs) and completely inverted it, making it at times unuseable and requiring substantial adjustment,” Pennington observed. “The initial incident management team should become the focal point of not only your initial tactical operations but of obtaining critical situational awareness on behalf of the EOC and all other entities involved in these catastrophic events.”

The entire concept of the EOC interface with an IMT has to be researched and likely rewritten to entail issues far greater than primarily wildfires, said Pennington, who in 2012 played a lead role in revising a course on EOC management for FEMA’s Emergency Management Institute.

For Stevens, the response challenges illustrate the necessity for a structured mechanism to perform data collection, share information, conduct analysis and develop the necessary intelligence from Tribal partners. She is developing a mechanism to support improvements to encourage nation-to-nation information sharing for the future.

Grant is creating a proposal that could potentially provide a day-by-day playbook for her division. The guide identifies what resources to assess, how to define and prioritize needs and to ensure that stakeholders are all represented.

“We’re working to set this up as a standard tool in the tool kit,” Grant said.

At the state level, Daugherty has been holding quarterly meetings with county emergency managers in Washington. The meetings are an opportunity to discuss best practices as well as molding personal relationships so necessary in times of catastrophe. Additionally, Daugherty’s team conducts internal exercises quarterly.

“I’m convinced the quarterly meetings and expanded training really paid off during this landslide,” he said. “We want to keep building relationships and expand participation in our quarterly exercises.”

As much as CHDS academics proved beneficial, the Center’s emphasis on critical thinking was equally invaluable, alumni said.

“This was the first large-scale event of this magnitude I have been involved in, but when I went into the emergency operations center and all the different agencies, everything made sense to me,” Davis said. “There was no learning curve, directly because of what I’ve learned at CHDS.”

The critical thinking skills that were furthered and strengthened by the ELP were valuable for Pennington as he expanded his emergency management role to become an instant strategic commander.

“There was to my knowledge no existing organizational structure that accurately portrayed what we were doing across the entire response,” Pennington said. “An organized structure had to be visualized and created. I had to think strategically, and with very little time. What the ELP did for me was to build upon my existing skill and experiences with a deeper understanding of how I should think more strategically. It worked.”